The Beeton cenotaph was commissioned in September of 2002, spearheaded by local council and Branch 421 of the Legion.  This memorial sits across the road from the old gates of the fairgrounds, which was the original memorial in Beeton.
The new cenotaph is a brick wall, featuring black stone plaques, inscribed with the names of those who gave their lives the two World Wars, and to honour those who served in Korea and in Peacekeeping missions.  A sign dedicated to those who donated and were responsible for the cenotaph, appears beside the memorial.

To Honour Those Who Sacrificed
Their Lives And Served In
The First World War.
1914 - 1918

Right:
In Memory And To Honour
Our Canadian Peacekeepers
Throughout Canada

A very busy branch #370 of the Royal Canadian Legion, serves the community of Iroquois and district.  The memorial here is in two parts.  First is a beautiful mural painted on the front of the legion, depicting several scenes of remembrance.  Most notable is the Iroquois Class destroyer, HMCS Iroquois.  Second is a beautifully restored anti-aircraft artillery gun, from the Second World War.

Marker text:
DUNDAS MURALS
"WE WILL REMEMBER THEM"

A LASTING TRIBUTE TO THE
YOUNG MEN AND WOMEN OF OUR AREA,
SOME BEING THE TENDER AGE OF 16
WHO FOUGHT BY LAND, SEA AND IN
THE AIR SO THAT WE COULD HAVE
THE FREEDOM WE ENJOY TODAY.
SOME WERE FORTUNATE AND
RETURNED HOME, SOME DIDN'T.

Very nice statue on a stone pillar, resting in a small park beside the Palmerston Carnegie Library.  As typical of most small-town memorials, this was first erected to honour those lost in the Great War of 1914-18, and later updated to add the names of those lost in the Second World War and Korea.

Marker text:
Front:
ERECTED BY
THE CITIZENS OF
PALMERSTON
IN MEMORY OF
HER HEROIC SONS
WHO GAVE THEIR LIVES
IN THE GREAT WAR

"GREATER LOVE
HATH NO MAN
THAN THIS..."

This cenotaph is foundbeautiful parkette, at the main intersection in Hastings, beside the Royal Canadian Legion Branch 106.  A beautifully engraved memorial featuring crossed rifles and swords, and ivy branches with maple leaves.   As with so many of these small town memorials, the list of names of the dead from the First World War is much longer than any other war, reminding us of the sacrifice given by those who fought in such a terrible conflict.

Marker text:
Front:
1914 - 1918
ERECTED BY THE
HASTING AND THE DARONTAL CHAPTERS OF
THE IMPERIAL ORDER DAUGHTERS OF THE EMPIRE.
IN PROUD AND LOVING MEMORY OF THOSE
WHO DIED IN DEFENCE OF THEIR COUNTRY

"THEIR NAME LIVETH FOR EVERMORE." 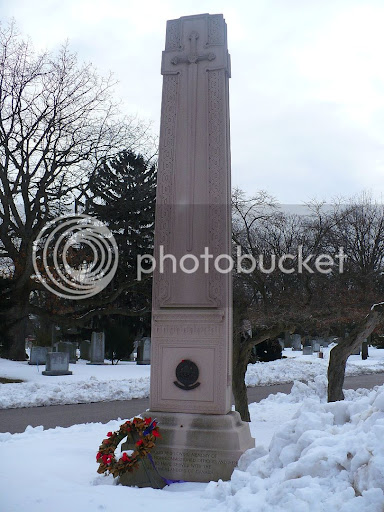 This memorial rests in Toronto's most famous cemetery, as a tribute to one of it's most famous military regiments.  The 48th Highlanders have a long and storied history, having been involved in almost all conflicts and peacekeeping actions since the Boer War.  The 48th have served the people of Toronto gallantly and proudly, not only in war, but also in peace and at community events.
The memorial is dedicated to all who have served with the regiment, and lists many of the major battles it has fought over the years.

Market text:
Front:
IN PROUD AND LOVING MEMORY OF
THE OFFICERS, NON-COMMISSIONED OFFICERS, AND MEN
WHO HAVE SERVED WITH THE
48th HIGHLANDERS OF CANADA 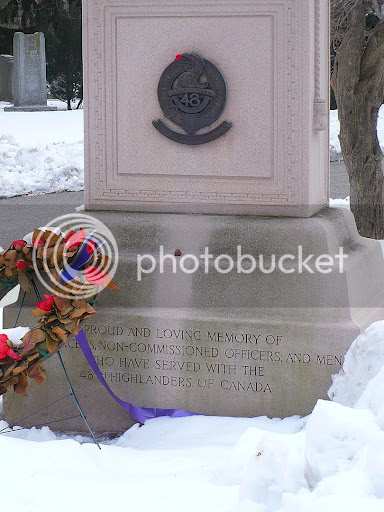 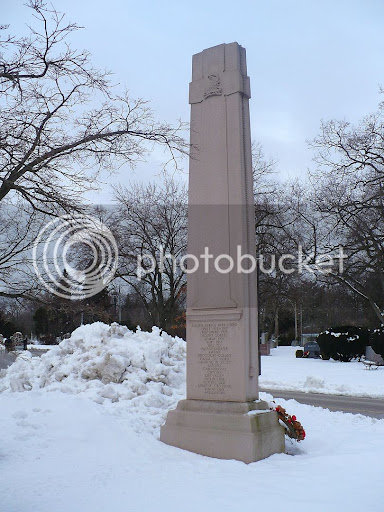 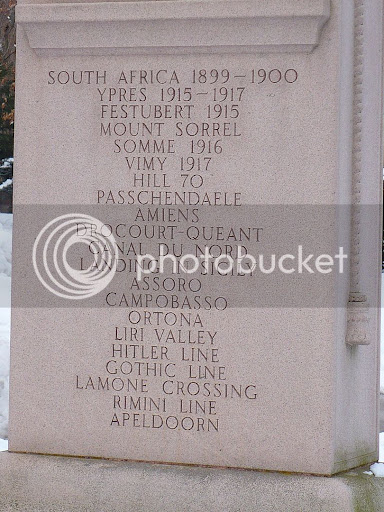 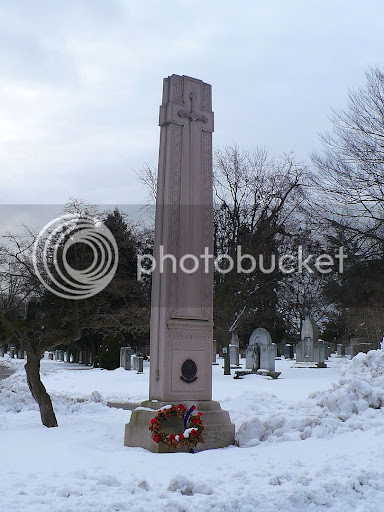 Dedicated to the men of Wiarton, who died in the two Great Wars and Korea.  The memorial rests beside Royal Canadian Legion Branch 208, and consists of a statue topping three shafts with the names of the dead.  The stone for the statue was sent from England, the statue features a WWI soldier at rest, paying his respects to his fallen brothers.  Originally erected after the First World War, additions to the memorial were added at later dates.

Marker text:
Centre column:
ERECTED TO PERPETUATE
THE MEMORY OF OUR HONOURED
DEAD AND THOSE WHO CARRIED
ON IN THE GREAT WAR
1914 - 1918
FROM THE TOWN OF WIARTON

On grass in front:
LEST WE
FORGET

According to the current map, this location is technically found in Ajax, although at the time when it was first erected, this was part of Pickering.  The Town of Ajax was created in 1941, and later the town lines where modified in 1974 due to the creation of Durham Region.
Here you will find two cobblestone cairns, in memory of those who served and died in the Great War.  The first cairn was dedicated by the citizens of South Pickering, the second by the International Order of Odd Fellows.  Today these memorials cairns sit quietly in Memorial Park, which also hosts an arena and sports fields.  The brass plaques mounted on these cairns pays homage to the names of those who made the ultimate sacrifice for their King and country.

Marker text:
First marker:
1914 - 1918
IN HONOUR
OF THOSE WHO WENT FROM PICKERING
TO SERVE IN THE GREAT WAR
AND IN MEMORY OF THOSE
WHO MADE THE SUPREME SACRIFICE

ERECTED BY THE CITIZENS OF SOUTH PICKERING