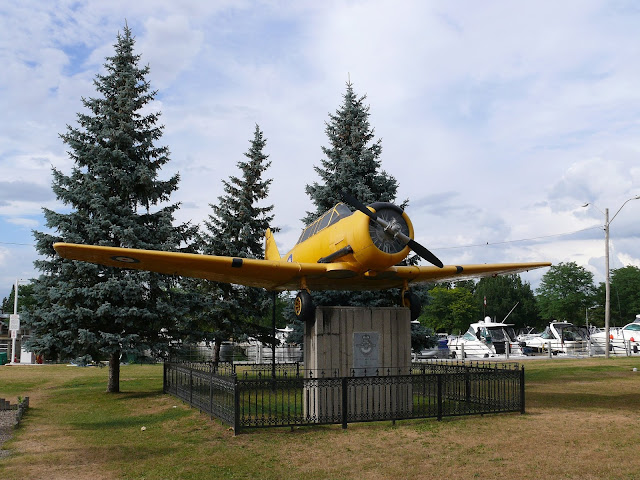 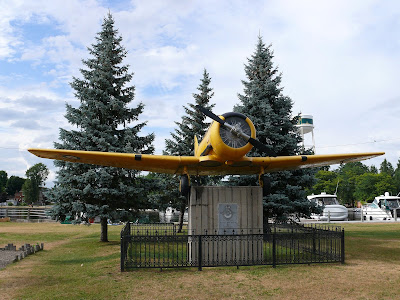 This memorial is dedicated to the 443 (Rideau Wing), and to all those who served and trained in the "Yellow Peril" during World War II.  This iconic aircraft was used by thousands of young airmen as they trained with the BCATP before heading to Great Britain and joined the fight in the air over Europe.  The Harvard on display here is numbered 443, to honour 443 Rideau Wing of the Royal Canadian Air Force Association.
One of the symbols etched into the stone plaque is that of the 1967 Canada Centennial Year, indicating that this memorial was erected as a centennial project in 1967.
Situated in a busy area alongside the Rideau Canal, Victoria Park is named after Queen Victoria, and now is home to a campground, picnic area, playground and boat docking amenities.  A beautiful reminder of the sacrifices made by so many young flyers in our fight for freedom. 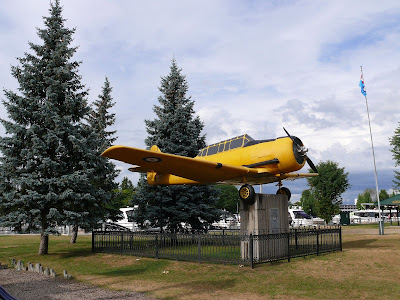 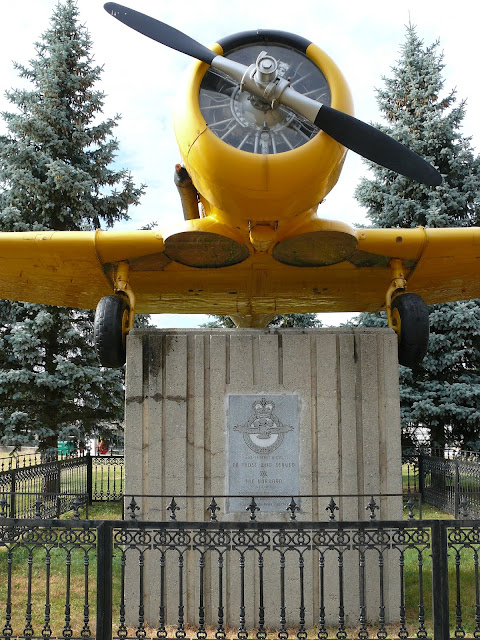 TO THOSE WHO SERVED

THE HARVARD
THE YELLOW PERIL 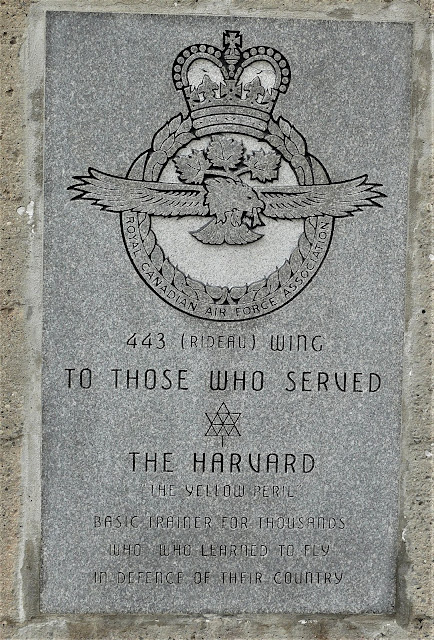 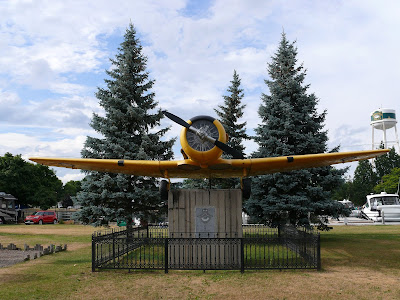 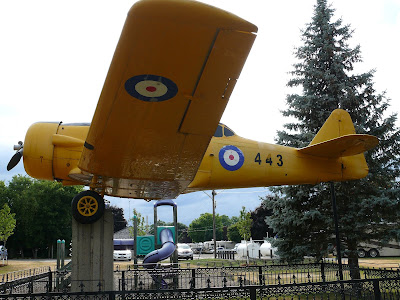 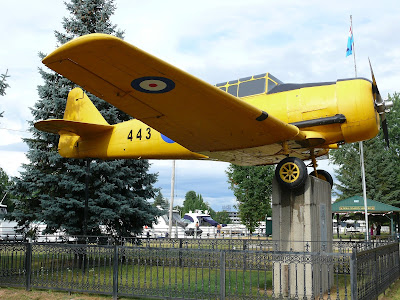 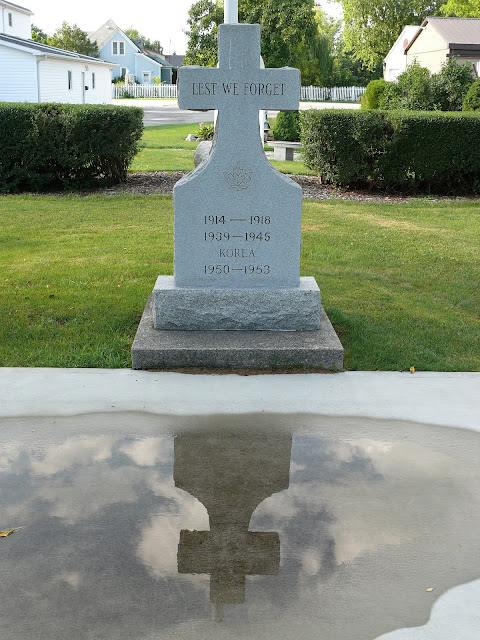 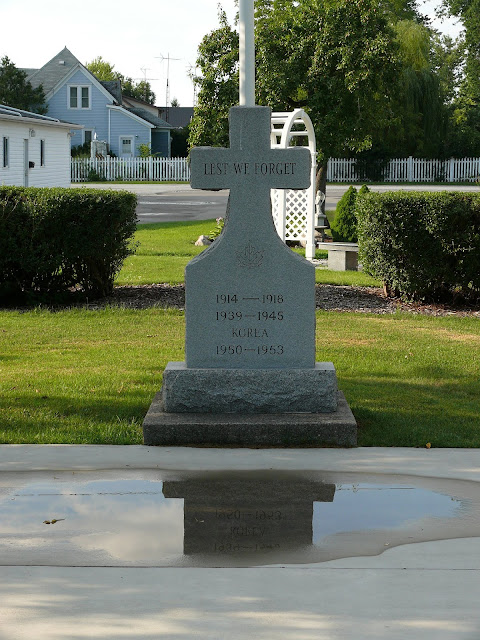 This memorial is found in a small, well-kept park in a quiet village.  The local horticultural society tends to planting flowers and keeping the grounds clear in summer.  A simple granite cross with the years of the major 20th century conflicts.  No names appear on the memorial, although the local United Church and the Legion each have Honour Rolls on display.  None were open during my visit. 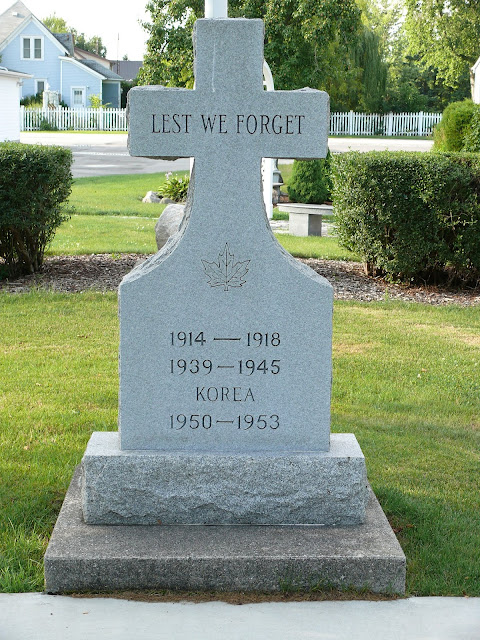 Market text:
Front:
LEST WE FORGET 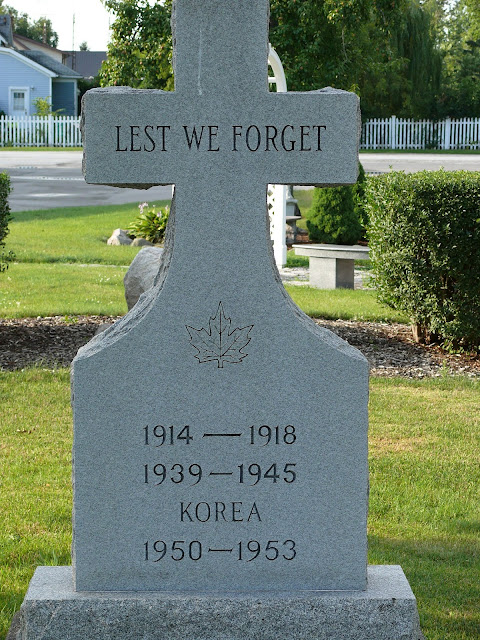 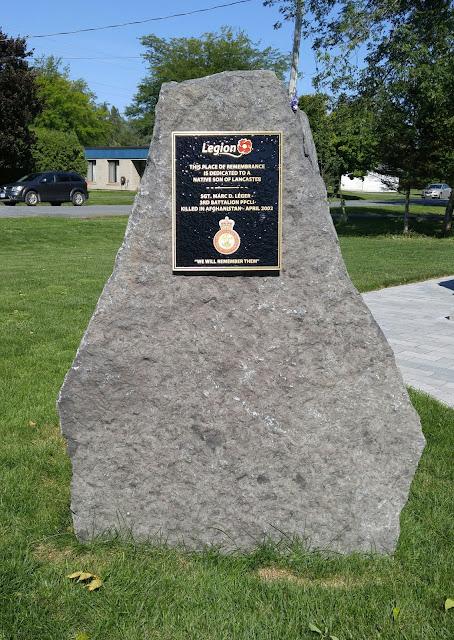 This memorial is a fairly recent addition, standing beside the Royal Canadian Legion Branch 544 in the village of Lancaster.  The focus of the memorial is a de-commissioned LAV III armoured vehicle with a plaque honouring all those who served in Afghanistan.  Also on the site is a stone pillar with a plaque to honour Sgt. Marc. D. Leger, who was killed in Afghanistan, along with three other soldiers, in a controversial friendly fire incident by an American fighter plane.   The memorial is lighted by LED lighting from dusk to dawn, to remind all who pass of the sacrifices made in the cause of freedom.

Thank you to fellow researcher Louise Bellec for the photos. 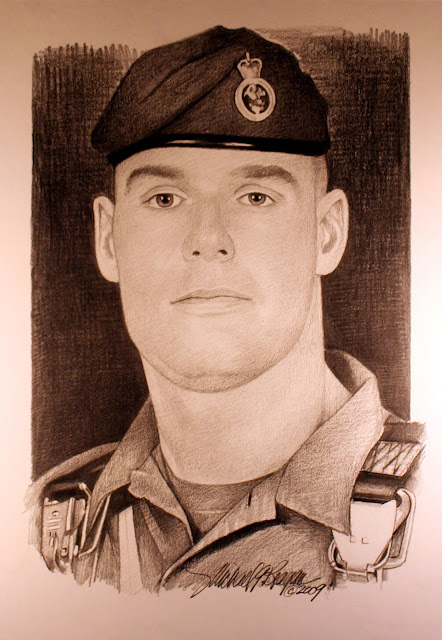 The following article is borrowed from http://www.projectheroes.ca

Sgt. Marc Leger’s laugh could be heard a mile away! A huge, heartfelt laugh as big as the man himself. At 6’4” with a zest for life he was hard to miss. Wise and thoughtful for his age, people were drawn to Marc. Maybe they knew he was the real deal, how he lived his life fully, or the fact he was a true friend, devoted husband, true romantic, who loved life, his job, his family, and his yellow lab Hunter, who was never far from his side.
Marc enlisted at 19 years of age.  His career with the 3PPCLI and Canadian Airborne was a huge sense of pride for him.
In February 2002, Marc was deployed to Afghanistan. Two months later, on April 17, 2002, Leger along with three other soldiers became Canada’s first deaths in Afghanistan and the first in a combat zone since the Korean War. Eight others were injured that night. Marc was 29.
In the days that followed Canada learned more about how much Marc  cared for others. It was on display during his work as a peacekeeper in the Livno Valley, Bosnia. The area had been ethnically cleansed and those who remained were living in horrid conditions. Marc and his unit started harassing the company commander for resources. He took leftover food, water and building supplies and made sure they were given to the people of the valley.  By the time his tour was done the people of the Livno Valley had livable homes again and Marc had a new nickname.  The people of the Livno Valley called him “King Marco.”
For his work in Bosnia, Marc was awarded the Deputy Chief of Defence Staff Commendation. He was also awarded the South West Asia Medal and United States Bronze star posthumously.
Marc wanted to experience everything life had to offer and one of the ways he did that was by traveling.  He loved to see the world in ways others wouldn’t or couldn’t. As a result, no matter where he was he was surrounded by people who wanted to be near him and experience his way of living life. Fully. Completely.
A full life in 29 years. He knew that…and admitted it in the summer of 2001 when he said, “If I died tomorrow, I’ve done so much. I’ve lived so much and had such a full life. I’d die happy.”
By J’lyn Nye 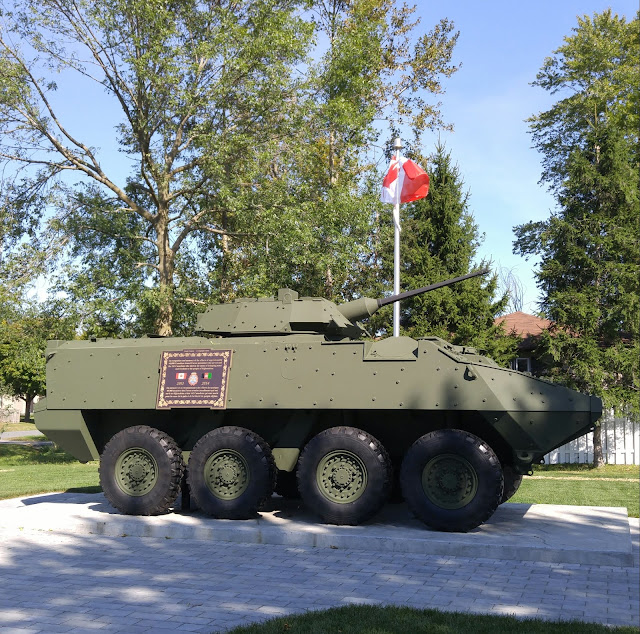 Marker text:
LAV plaque:
In recognition and memory of the efforts of approximately
40,000 Canadian Armed Forces personnel who served and
the 162 Canadians who died in the cause of bring peace
and freedom to the people of Afghanistan. 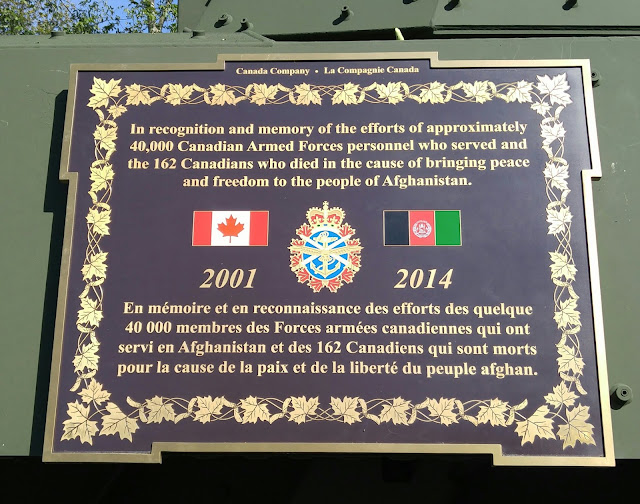 "WE WILL REMEMBER THEM" 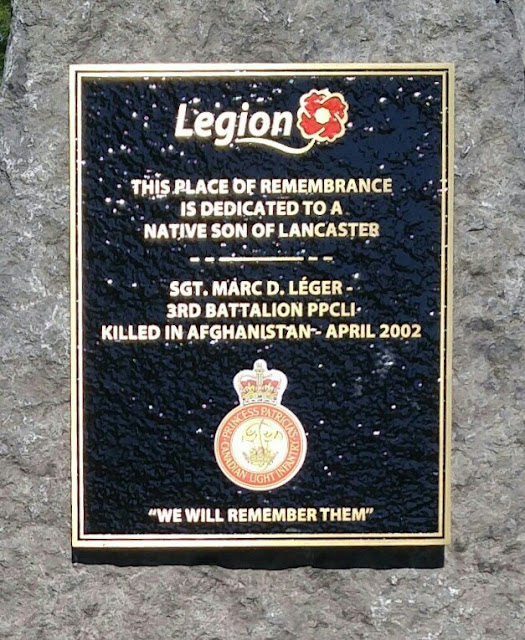 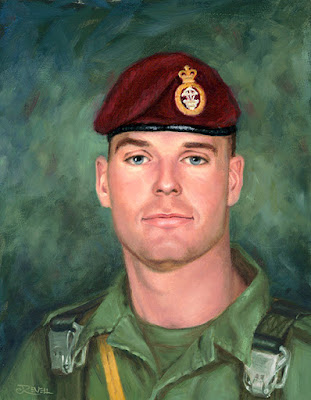 Artwork by Cindy Revell
Posted by Tim Laye at 20:35 No comments: