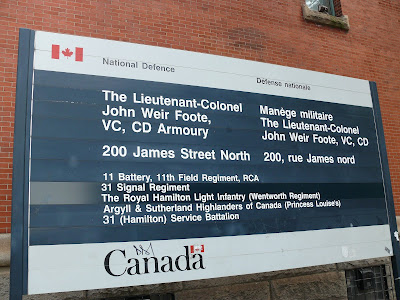 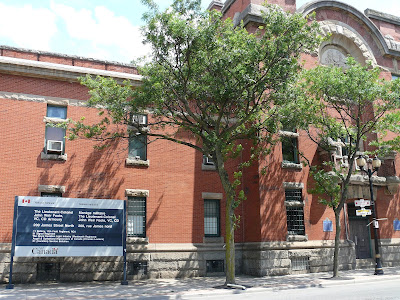 The Lieutenant-Colonel John Weir Foote, VC CD Armoury in Hamilton was constructed between 1888 and 1908, to house the local militia forces of the area.  Today it is home to the 11 Battery of the 11th Field Regiment of the Royal Canadian Artillery, 31 Signal Regiment, The Royal Hamilton Light Infantry, Argyll and Sutherland Highlanders of Canada (Princess Louise's), and 31 Service Battalion.
The heritage building features two separate drill halls and a host of historic features.  A series of plaques along the James Street side of the armoury portrays the stories of several men associated with this iconic National Historic Site.  The most famous being Lt.-Col. John Weir Foote VC CD, for whom the building has been named after.  A Reverend from Madoc, Ontario, Padre Foote earned his Victoria Cross on the beaches of Dieppe, giving comfort and solace to the soldiers of the Royal Hamilton Light Infantry as they suffered major losses in the battle.
I will let the plaques speak for themselves, as they tell the story of a great military history and the brave men behind that story.  Also featured are the words etched near the entrance, honouring those who died in the Great War. 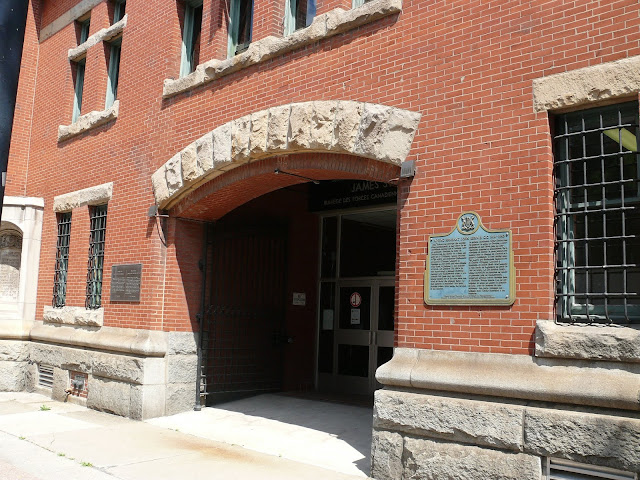 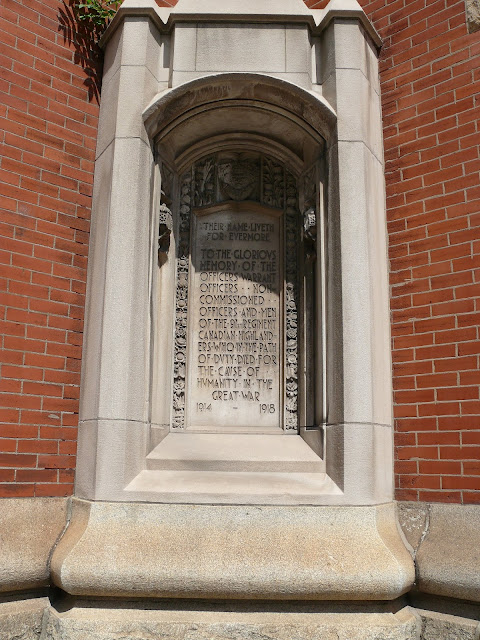 TO THE GLORIOUS
MEMORY OF THE
OFFICERS, WARRANT
OFFICERS, NON-
COMISSIONED
OFFICERS AND MEN
OF THE 91st REGIMENT
CANADIAN HIGHLAND-
ERS WHO IN THE PATH
OF DUTY DIED FOR
THE CAUSE OF
HUMANITY IN THE
GREAT WAR
1914 - 1918 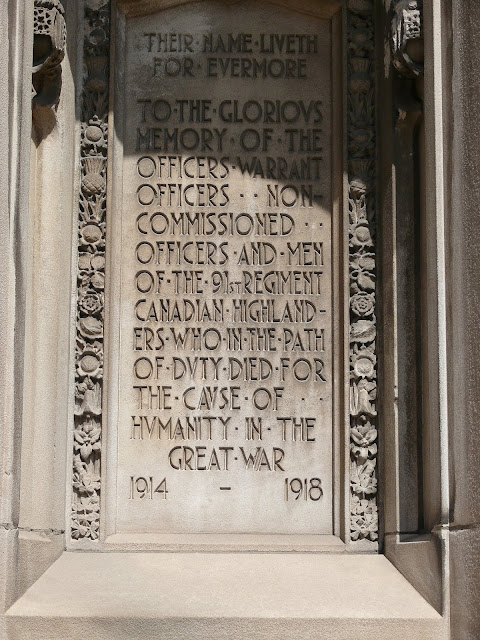 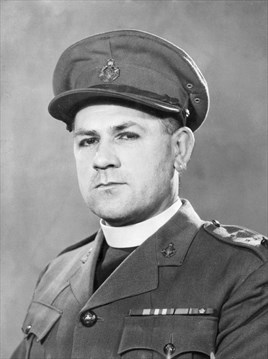 THIS ARMOURY IS DEDICATED TO THE MEMORY OF
LIEUTENANT-COLONEL JOHN WEIR FOOTE, VC, CD.
PADRE OF THE ROYAL HAMILTON LIGHT INFANTRY.
PADRE FOOTE WAS AWARDED THE VICTORIA CROSS
FOR VALOUR DURING THE RAID ON DIEPPE ON
19 AUGUST 1942, WITHOUT THOUGHT FOR HIS
OWN PERSONAL SAFETY, PADRE FOOTE CHOSE TO
REMAIN WITH THE PRISONERS OF WAR TO GIVE
PHYSICAL AND SPIRITUAL COMFORT TO THE
WOUNDED AND DYING MEN OF HIS OWN AND
SISTER REGIMENTS. 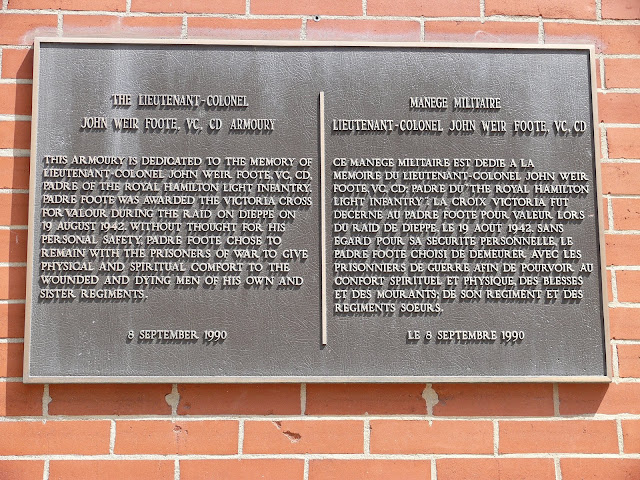 The north section of this building
(1887-1888) is a rare surviving example
of the second wave of armoury
construction in Canada. Designed
by Henry James, it exemplifies the
replacement of earlier wooden drill
sheds with substantial brick structures.
They provided increased security
for arms storage and underlined the
importance of city militia units as the
country's first line of defence. The south
section (1908), designed by Stewart and
Whitton, reflects a subsequent phase of
construction and militia reforms, which
encouraged the increasing effectiveness
of Canada's expanding armed forces. 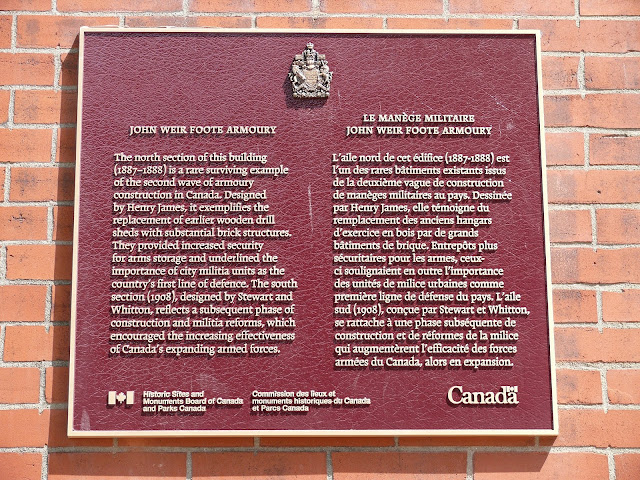 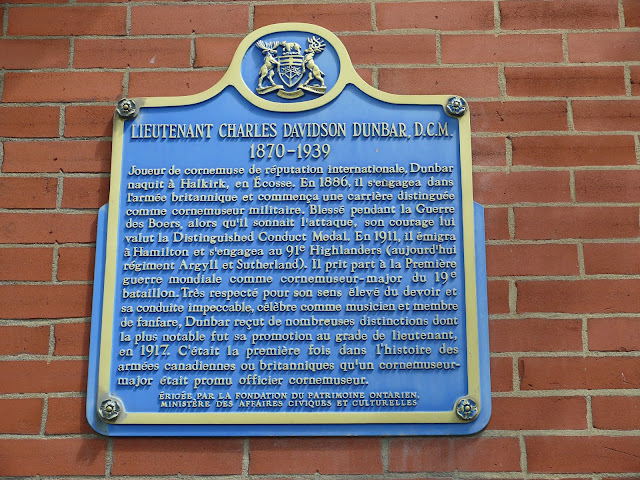 Lieutenant Dunbar Plaque:
LIEUTENANT CHARLES DAVIDSON DUNBAR, D.C.M.
1870 - 1939
An internationally renowned piper, Dunbar was born in
Halkirk, Scotland. In 1886 he joined the British Army,
embarking upon a distinguished career as a military
piper. During the Boer War, Dunbar was wounded while
piping troops into battle. For his gallantry he was
awarded the Distinguished Conduct Medal. In 1911 he
emigrated to Hamilton where he soon joined the 91st
(later the Argyll and Sutherland) Highlanders. As pipe-
major of the 19th Battalion, he saw action during the
First World War. Widely respected for his devotion to
duty and gentlemanly demeanour and acclaimed as a
musician and bandsman, Dunbar received many honours.
Unique among them was his appointment as lieutenant
in 1917, the first pipe-major to become a pipe-officer
in the history of Canadian and British forces. 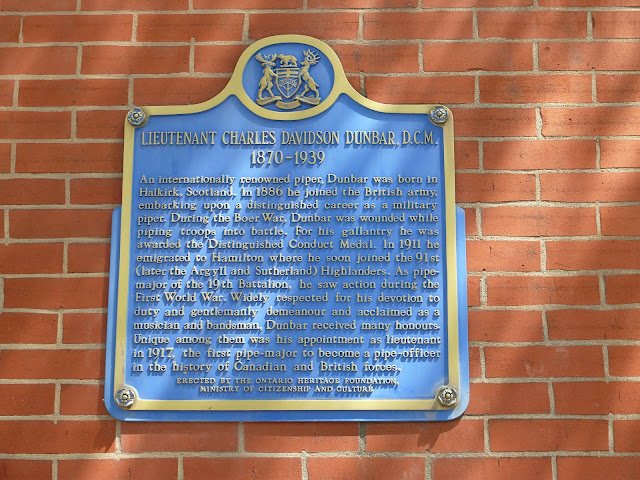 "Jock" Rennie was awarded the George
Cross posthumously in May 1944 for an
instinctive, selfless act of heroism. Born
in Aberdeen, Scotland, he came to
Ontario with his family as a child and
grew up in Kitchener. Rennie enlisted
in The Argyll and Sutherland Highlanders
of Canada (Princess Louise's) at
Hamilton in July 1940, and went overseas
with them to England in the summer
of 1943. On October 29, 1943, he
was supervising a grenade-throwing
exercise near Riddlesworth when a live
grenade fell back into the trench.
Rennie pushed one of his men aside and
tried to throw the grenade clear. At
that moment it exploded. His body
shielded others from harm, but he died
of his injuries. 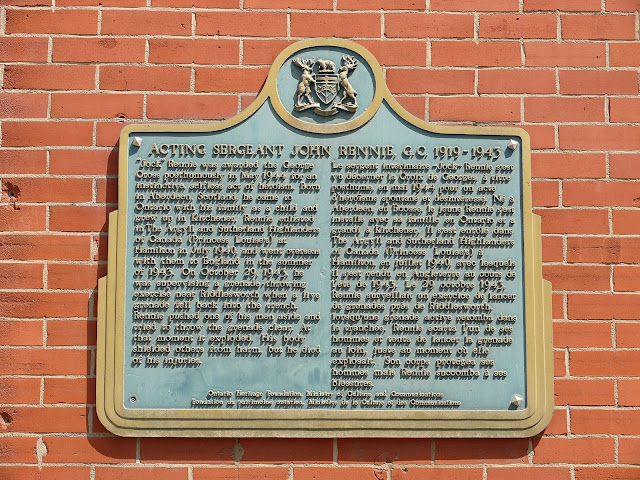 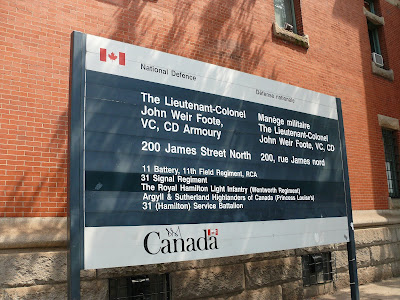 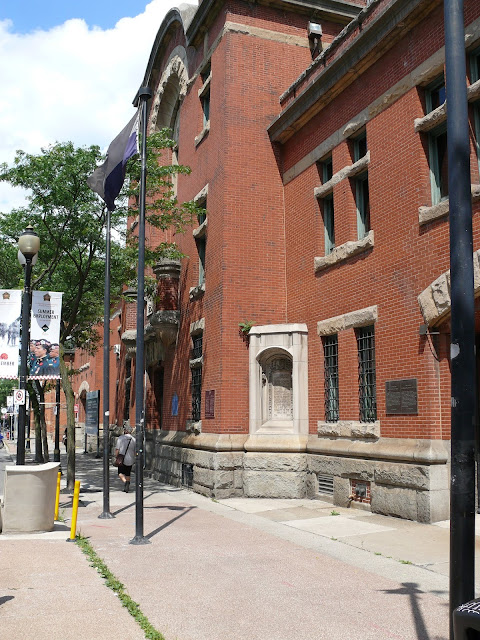 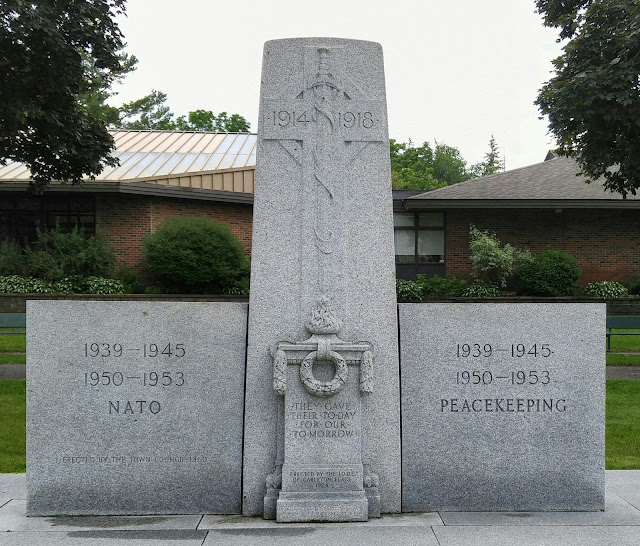 This memorial was erected in 1924, with great assistance from the local I.O.D.E. members.  Located in Memorial Park, two plaques accompany the memorial which give further history of the park and the memorial itself.  The names of those who died in conflict are engraved in the stone, originally those lost in WWI, then in 1960, two wings where added to list those lost in WWII and Korea.  A pair of 105mm Howitzers also flank the memorial, as well as a pair of benches.  This park is considered sacred ground, used only for remembrance and reflection.
Also in the park is an Ontario Historic Plaque dedicated to Capt. A. Roy Brown D.S.C, the pilot credited with downing of Baron von Richthofen in aerial combat over the battlefields of France.

**Special thanks to Louise Bellec for the photos. 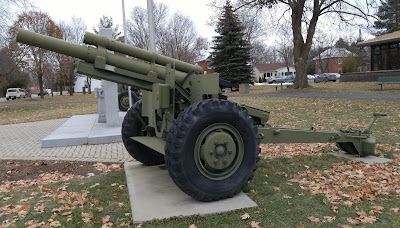 THEY GAVE
THEIR TODAY
FOR OUR
TOMORROW

ERECTED BY THE TOWN COUNCIL 1960

Back:
OUR
HONOURED DEAD 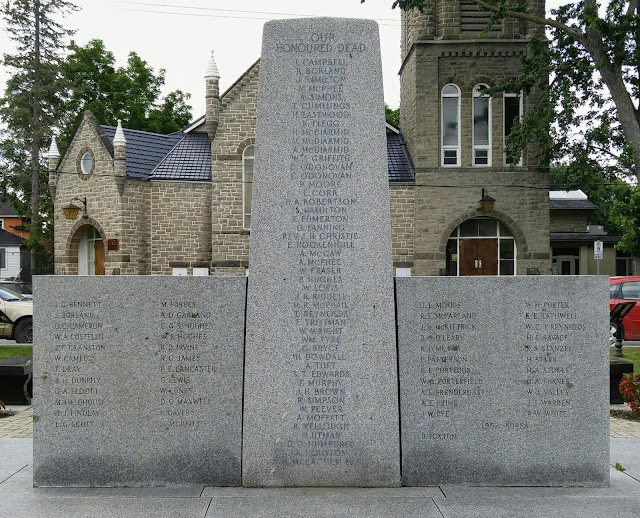 Victor in aerial combat over Baron Manfred von Richthofen,
the First World War's leading fighter pilot and German
national hero, Arthur Roy Brown was born at Carleton
Place. In 1915 he qualified as a civilian pilot and was
commissioned in the Royal Naval Air Service. In the thick
of vicious air fighting in 1917-18, Brown is credited
with at least 12 enemy planes, earning the Distinguished
Service Cross and Bar. Though the Canadian's downing
of Richthofen was contested by Australian ground gunners,
the official award was given to Captain Brown. Over-
coming severe war injuries, he returned to civilian life
and later organized an air transport company which
served Northern Ontario and Quebec. 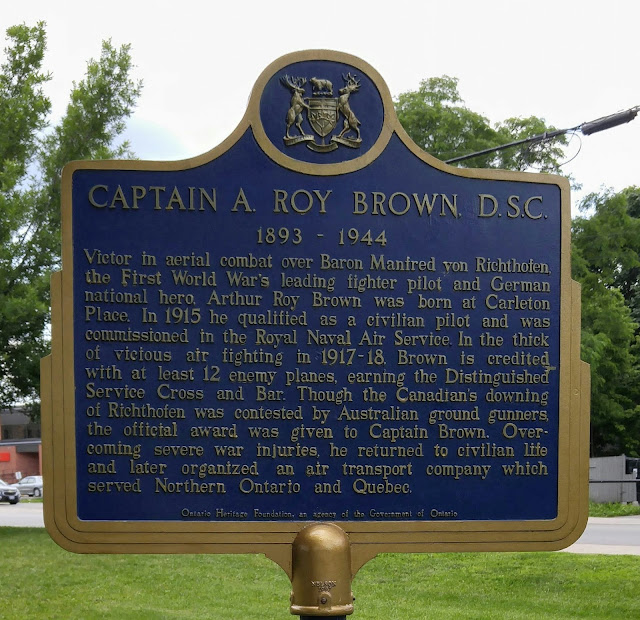 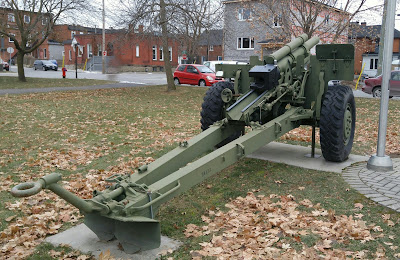 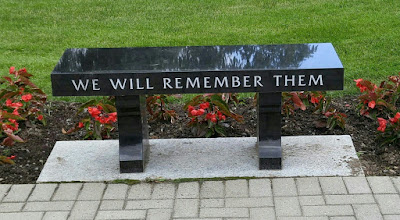 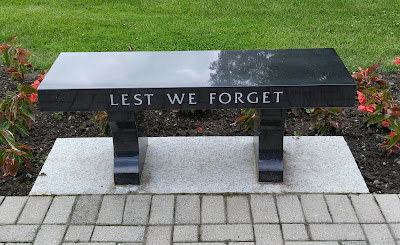