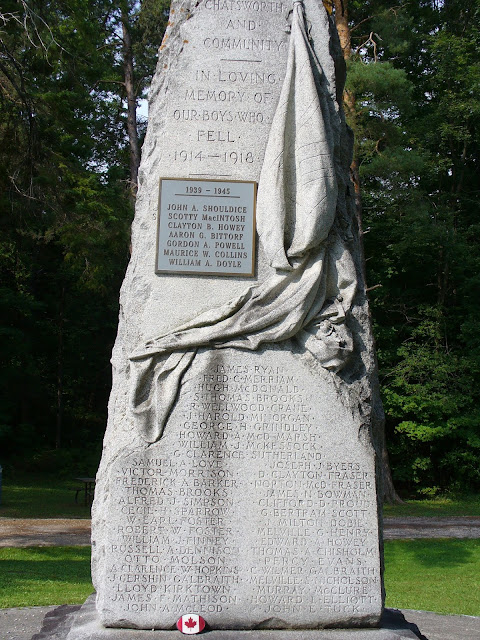 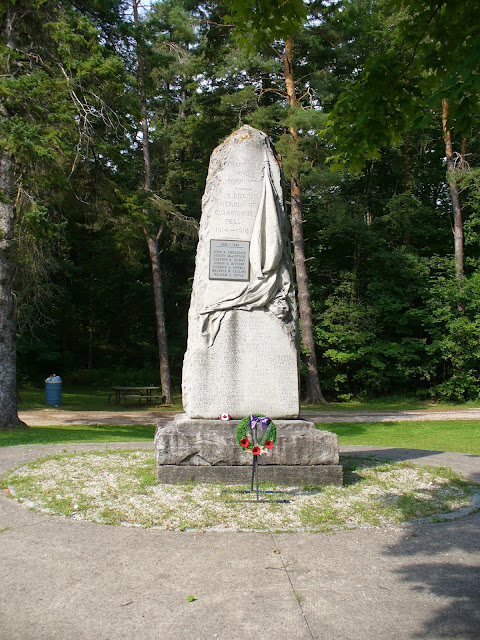 This loving memorial was first erected by the community of Chatsworth to honour those who fell in the Great War.  It consists of a sculptured stone slab, with the names of those lost engraved forever in the rock.
A metal plaque was added later for those who died in the Second World War. 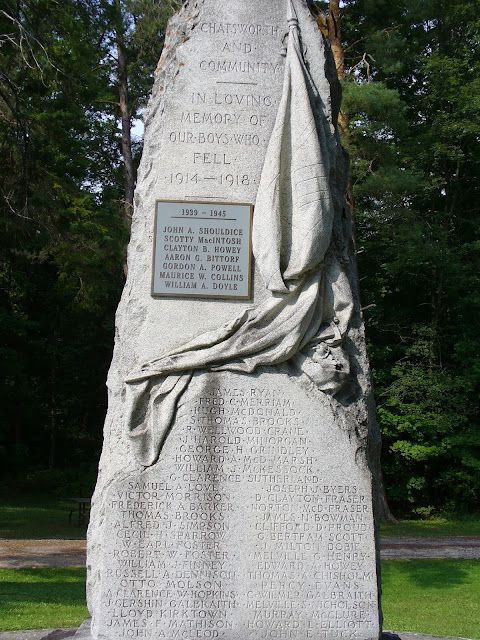 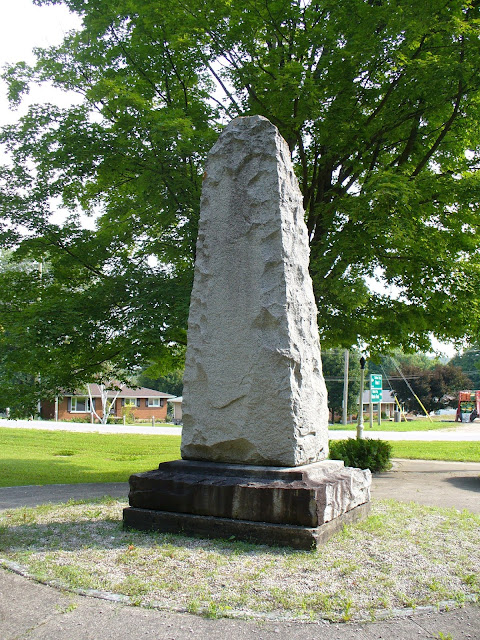 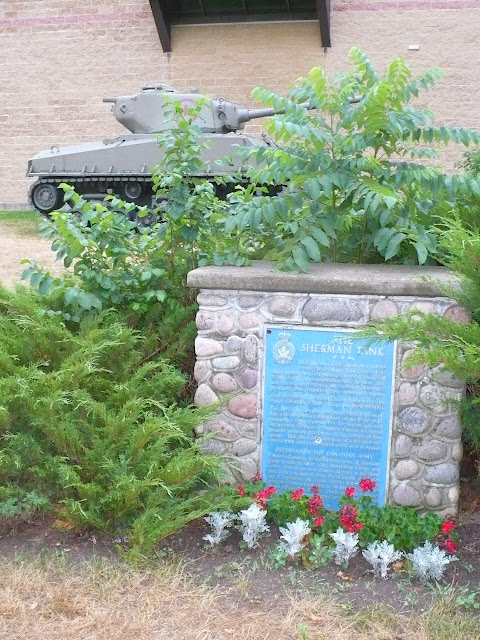 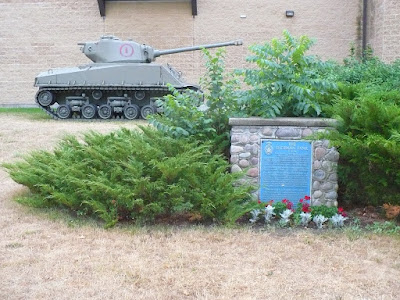 A static memorial featuring a Sherman Tank, along with a plaque dedicated to those who served in World War Two in the famous tank, as well as to those who produced the tanks back at home.  The history and stats of this popular armoured vehicle are listed on the plaque.  Markings on this tank are representing the command tank of Major David Currie V.C., South Alberta Regiment. 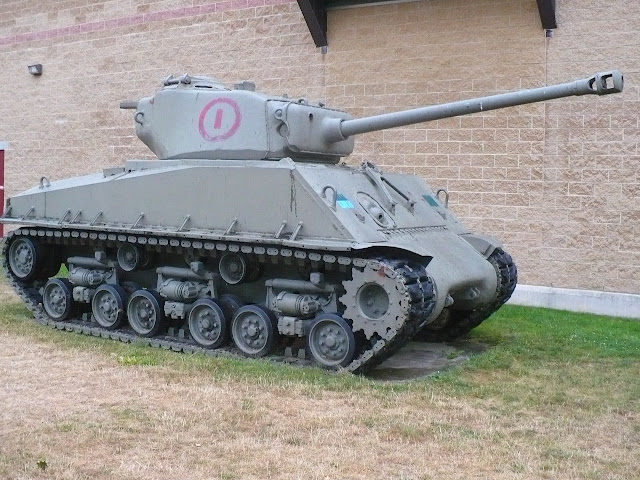 Marker text:
(Legion crest)
SHERMAN TANK
This Sherman Tank stands as a trubute
to the valour of the Tanks Crews of all
allied armies who used Shermans in every theatre of
World War II.  It commemorates also, all those men
and women who worked in the Arsenal of Democracy
producing some 40,000 of these American weapons.

Oct. 1942 - The Sherman Tank received its baptism of
fire with the British Eighth Army in the Battle of El
Alamein, Egypt.  June 6, 1944 - The British up-gunned
six hundred Shermans with their famous seventeen
pounder anti-tank gun for the D-Day invasion of Nor-
mandy.  This, the Firefly Sherman was the most suc-
cessful tank used by the British and Canadian armies.

SHERMANS IN THE CANADIAN ARMY
Fourteen Canadian Armoured Regiments of Sherman
Tanks fought in Sicily, Italy, Northwest Europe and
Korea.  One of the most famous exploits of the Sher-
man Tank was that of Major David Currie, command-
ing "C" Squadron, the South Alberta Regiment, who
won the Victoria Cross August 20, 1944, in the battle
of the Falaise Gap, France.  The Insignia on Sherman
78-901 commemorates Major Currie's command tank. 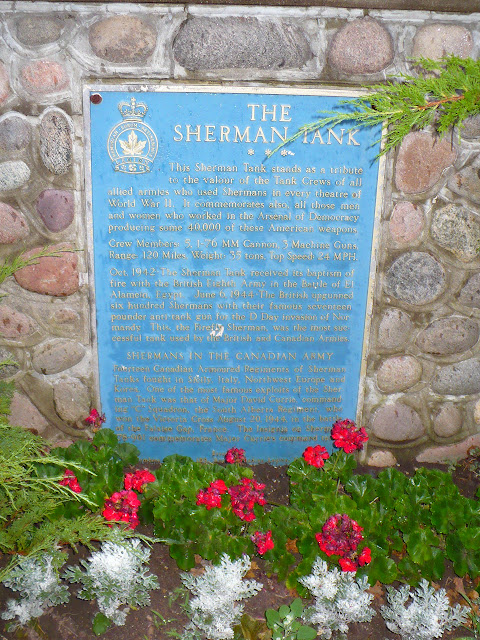 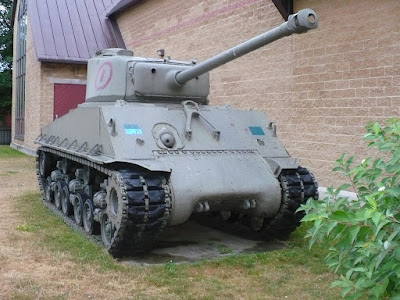 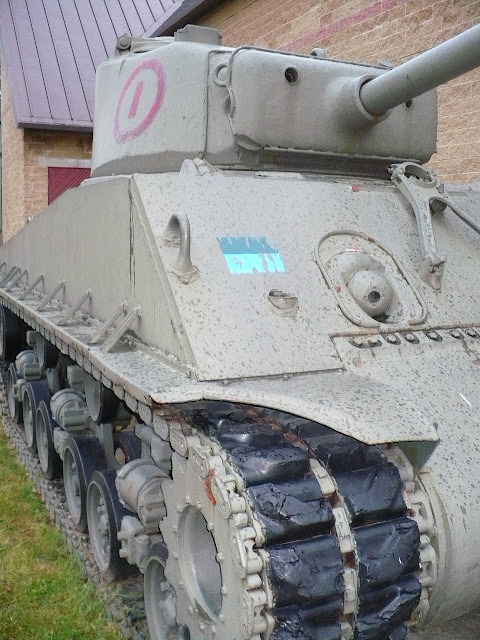 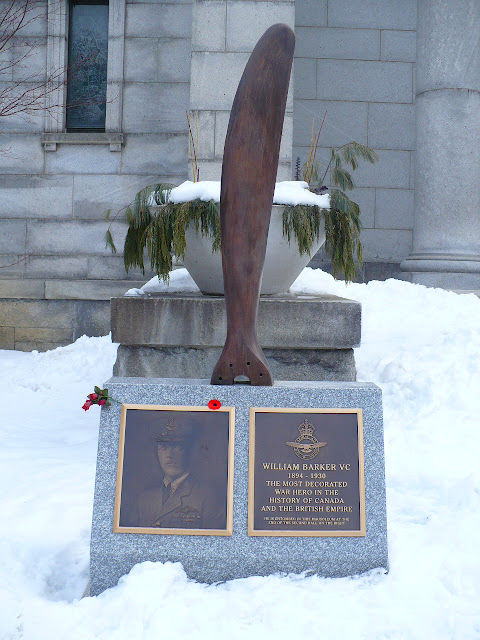 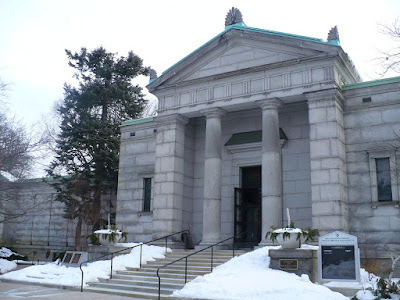 This fitting memorial to the most decorated man in Canada and the British Empire, was dedicated on September 22, 2011.  A single aircraft prop adorns a simple memorial with two plaques.  A further plaque inside the memorial lists the accolades awarded to this great hero.  When he died tragically in 1930, his state funeral was the largest ever held in Toronto. 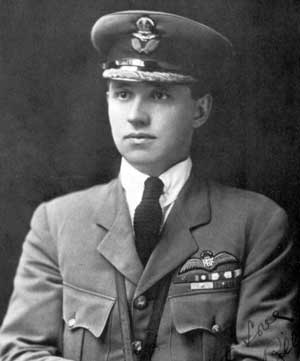 Major William George Barker VC
William George Barker was born in Dauphin, Manitoba on 3 November 1894. During the First World War, Barker enlisted as an infantryman, but later transferred to the Royal Flying Corps (from 1 April 1918, the Royal Air Force).
A superb fighter pilot, he was responsible for the destruction of 50 enemy aircraft.
On 27 October 1918, while flying alone over the Forêt de Mormal in France on his way back to England, Major Barker engaged successive formations of German aircraft. After shooting down an enemy two-seater, he was attacked by a fighter and suffered a wound in his thigh. Barker then found himself surrounded by enemy fighters and was again severely wounded. Nevertheless, despite his wounds, he succeeded in bringing down three more German aircraft before crashing behind his own lines. For his conduct on this occasion, Major Barker was awarded the Victoria Cross.
Barker was killed in a flying accident at Rockcliffe airport, near Ottawa, on 12 March 1930. In addition to the Victoria Cross, for his wartime service Barker received the Distinguished Service Order with one bar, and the Military Cross with two bars.
Citation
“On the morning of the 27th October, 1918, this officer observed an enemy two-seater over the Fôret de Mormal.  He attacked this machine, and after a short burst it broke up in the air.  At the same time a Fokker biplane attacked him, and he was wounded in the right thigh, but managed, despite this, to shoot down the enemy aeroplane in flames.
He then found himself in the middle of a large formation of Fokkers, who attacked him from all directions; and was again severely wounded in the left thigh; but succeeded in driving down two of the enemy in a spin.
He lost consciousness after this, and his machine fell out of control.  On recovery he found himself being again attacked heavily by a large formation, and singling out one machine, he deliberately charged and drove it down in flames.
During this fight his left elbow was shattered, and he again fainted, and on regaining consciousness he found himself still being attacked, but, notwithstanding that he was now severely wounded in both legs and his left arm shattered, he dived on the nearest machine and shot it down in flames.
Being greatly exhausted, he dived out of the fight to regain our lines, but was met by another formation, which attacked and endeavoured to cut him off, but after a hard fight he succeeded in breaking up this formation and reached our lines, where he crashed on landing.
This combat, in which Major Barker destroyed four enemy machines (three of them in flames), brought his total successes up to fifty enemy machines destroyed, and is a notable example of the exceptional bravery and disregard which this very gallant officer has always displayed throughout his distinguished career.
Major Barker was awarded the Military Cross on 10th January, 1917; first Bar on 18th July, 1917; the Distinguished Service Order on 18th February, 1918; second Bar to Military Cross on 16th September, 1918; and Bar to Distinguished Service Order on 2nd November, 1918.”
*taken from  http://www.cmp-cpm.forces.gc.ca/dhh-dhp/gal/vcg-gcv/bio/barker-wg-eng.asp 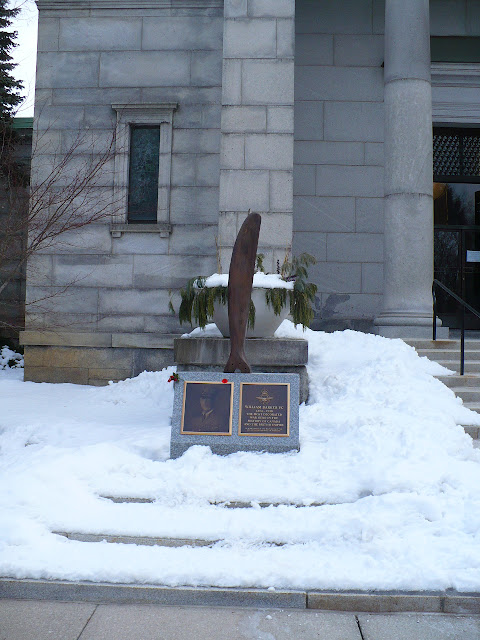 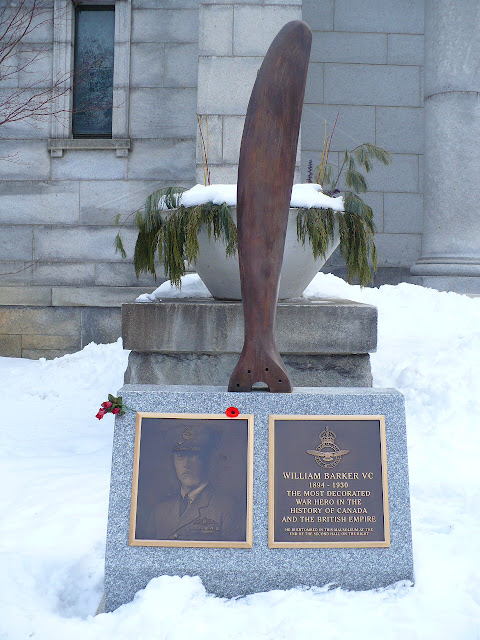 Marker text:
Outside:
WILLIAM BARKER VC
1894 - 1930
THE MOST DECORATED
WAR HERO IN THE
HISTORY OF CANADA
AND THE BRITISH EMPIRE 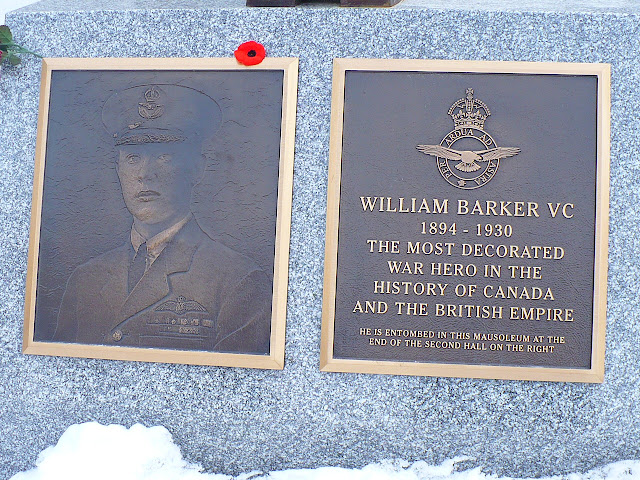 MOST DECORATED WAR HERO IN THE HISTORY OF CANADA
THE BRITISH EMPIRE, AND THE COMMONWEALTH OF NATIONS

Born in a log cabin in Manitoba, he entered the Great War as a simple soldier.
He soon joined the Royal Flying Corps, first as observer, then as pilot.
He rose in rank and fame, and became so skilled
that during his last twelve months of combat
not one pilot under his command
or aeroplane under his escort
was lost to the enemy.

By war's end, he had downed fifty enemy aircraft.
His fellow ace, William Avery Bishop VC, would call him
"THE DEADLIEST AIR FIGHTER WHO EVER LIVED"

After he died in an aviation accident,
his state funeral was the largest ever held
in the history of Toronto. 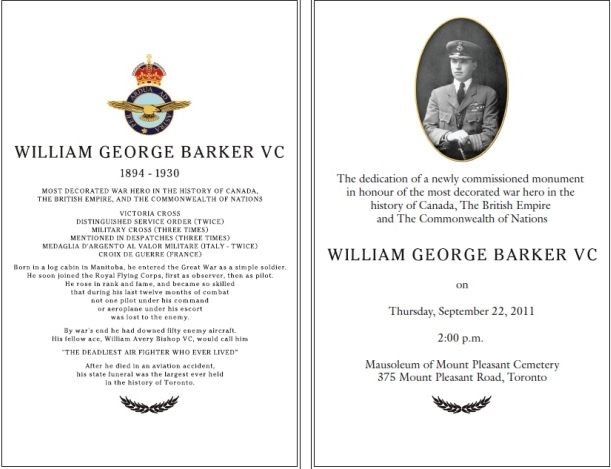 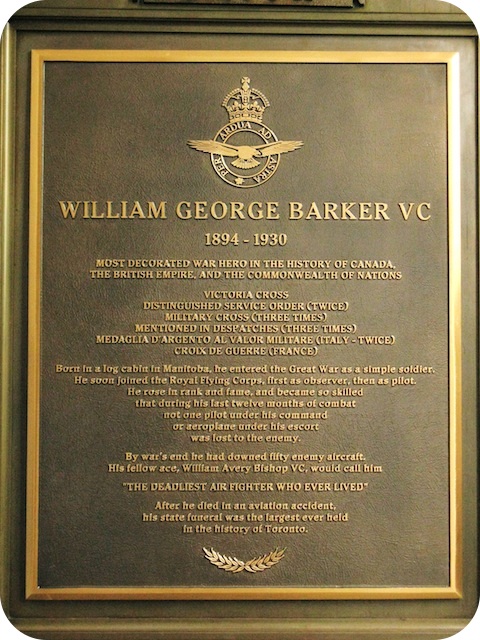 Above photo borrowed from: *http://www.torontoplaques.com/Pages_VWZ/William_George_Barker.html 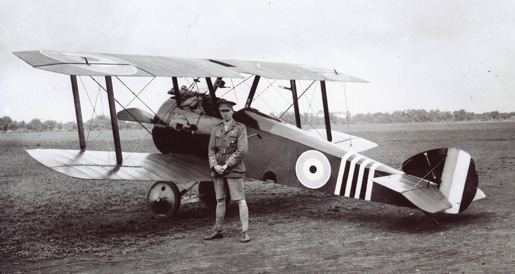