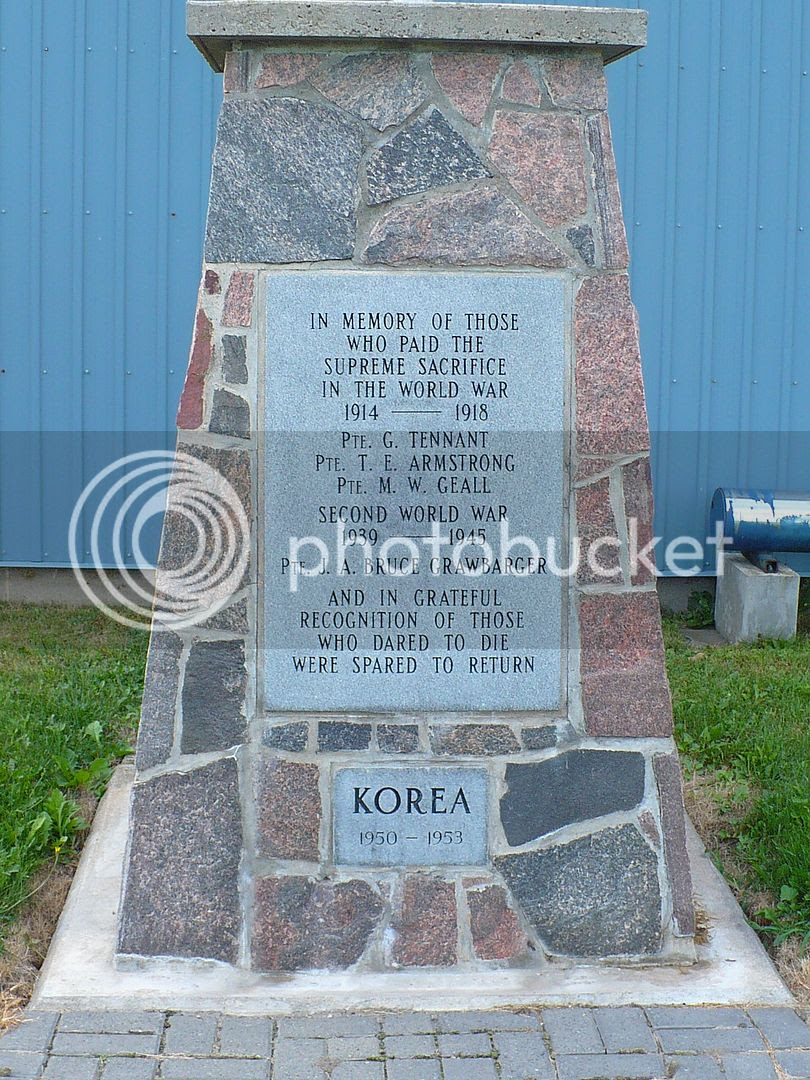 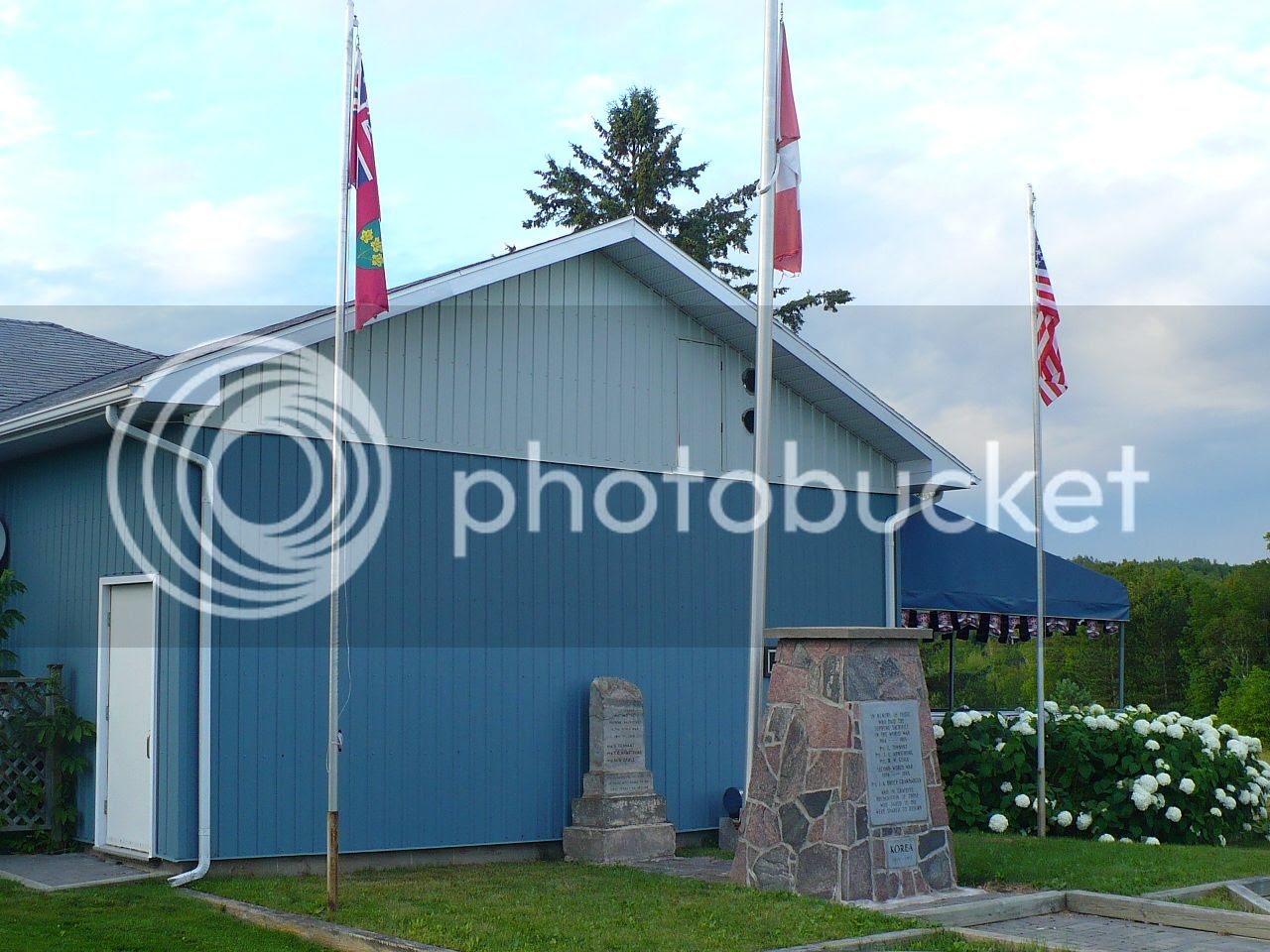 In front of the Royal Canadian Legion Branch 639, you will find two memorials.  The first is the original memorial erected in 1939 by the Restoule Women's Institute.  It was first located in front of Restoule Public School, which was closed in 1992, and later re-opened as the Legion in 1995.  The stone was refurbished in September 1997, and still rests against the wall of the Legion.

The second memorial, and the most recent was an updated version of the original stone, with the additions of World War II and Korea.  This new cairn sits in front of the old memorial, and is a proud testament of the dedication of the citizens of Restoule to remember those who served. 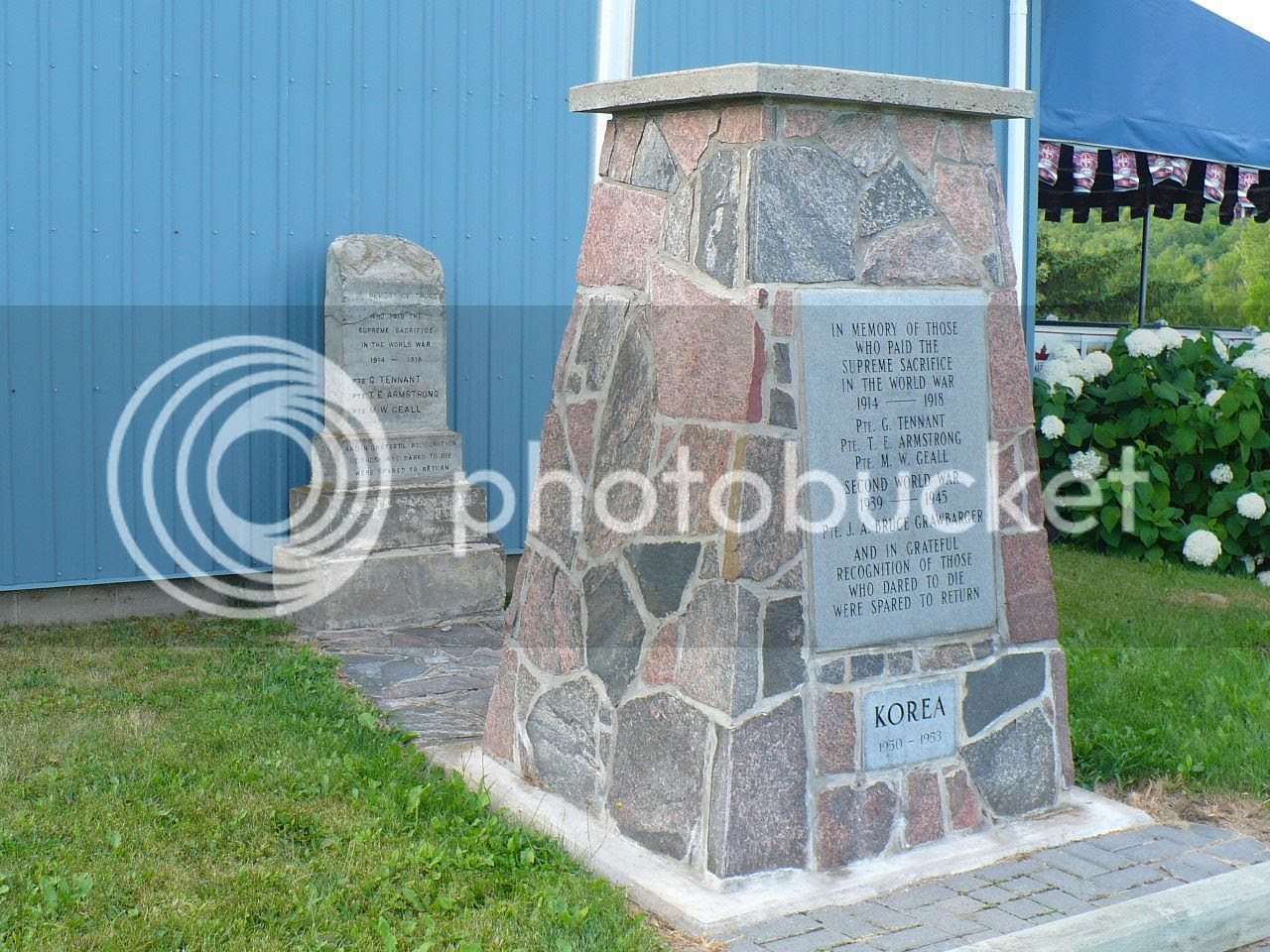 Marker text:
IN MEMORY OF THOSE
WHO PAID THE
SUPREME SACRIFICE
IN THE WORLD WAR
1914-1918 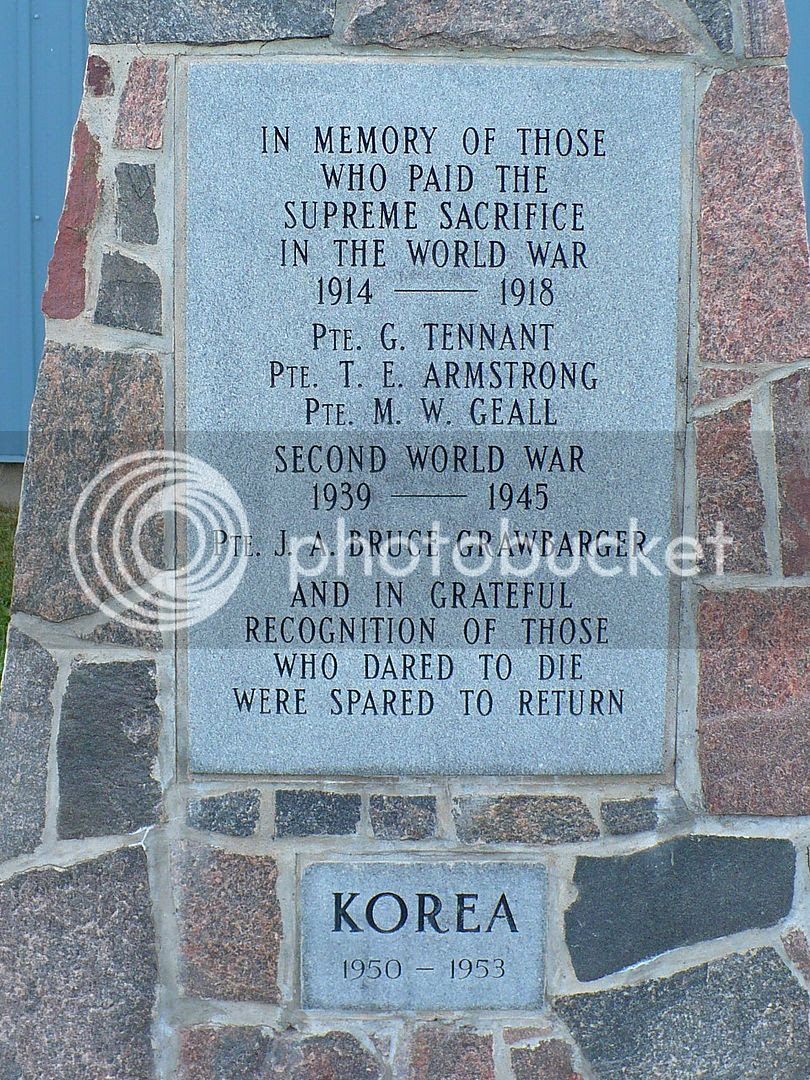 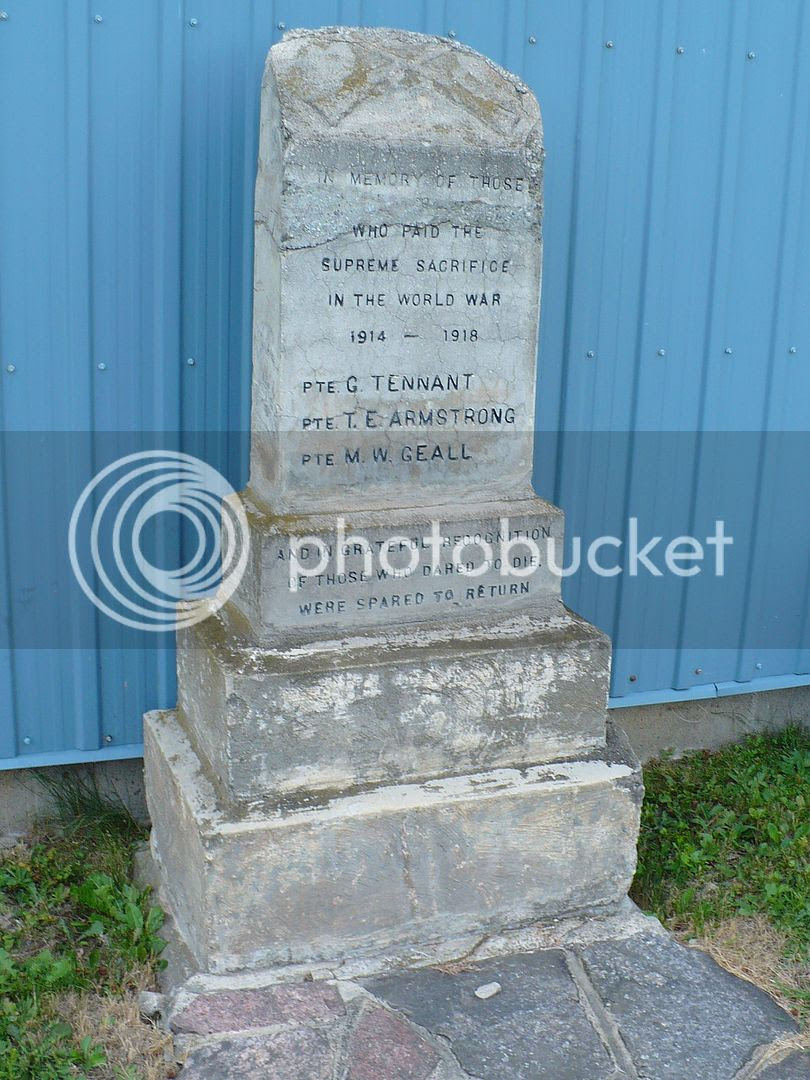 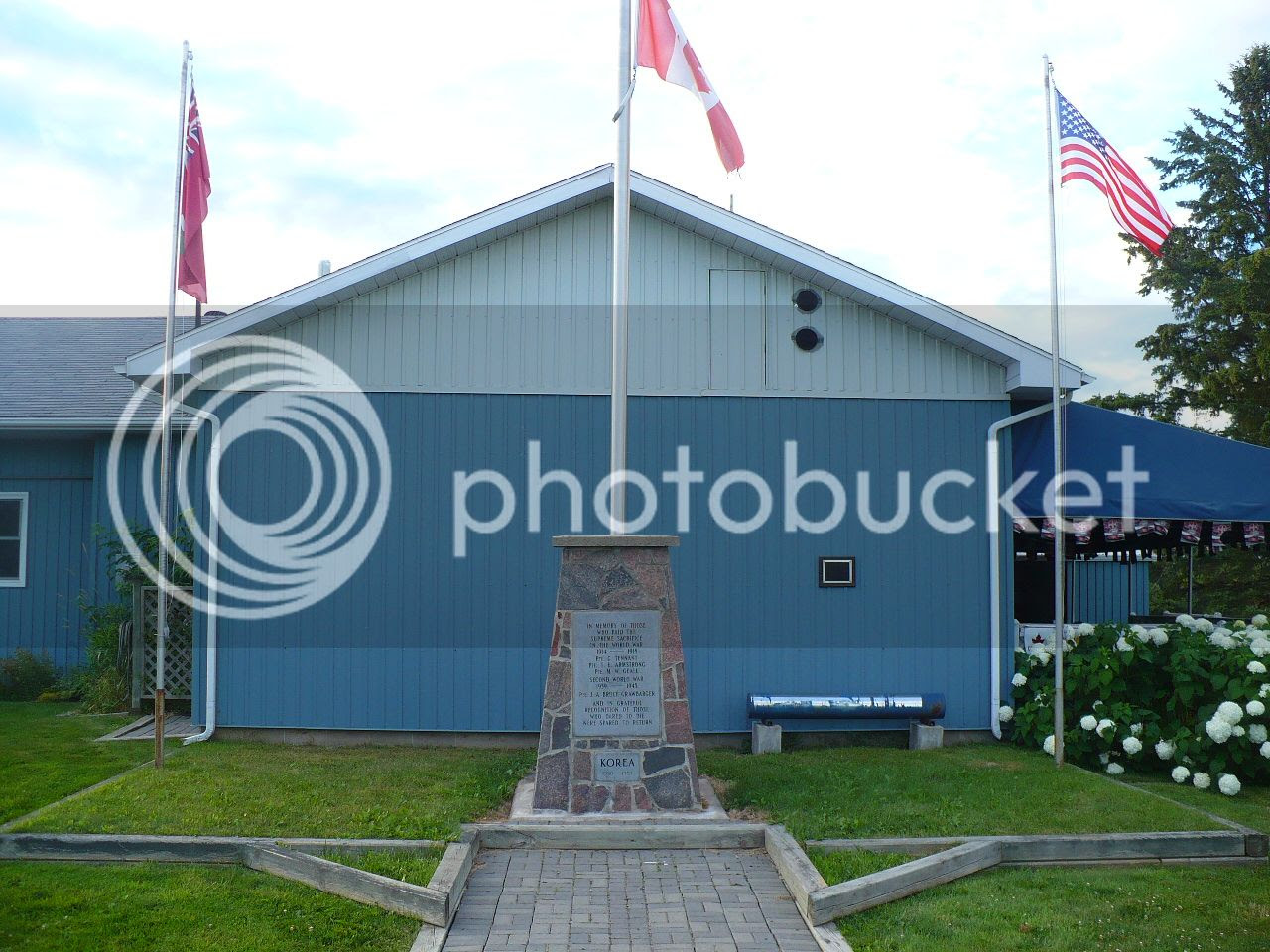 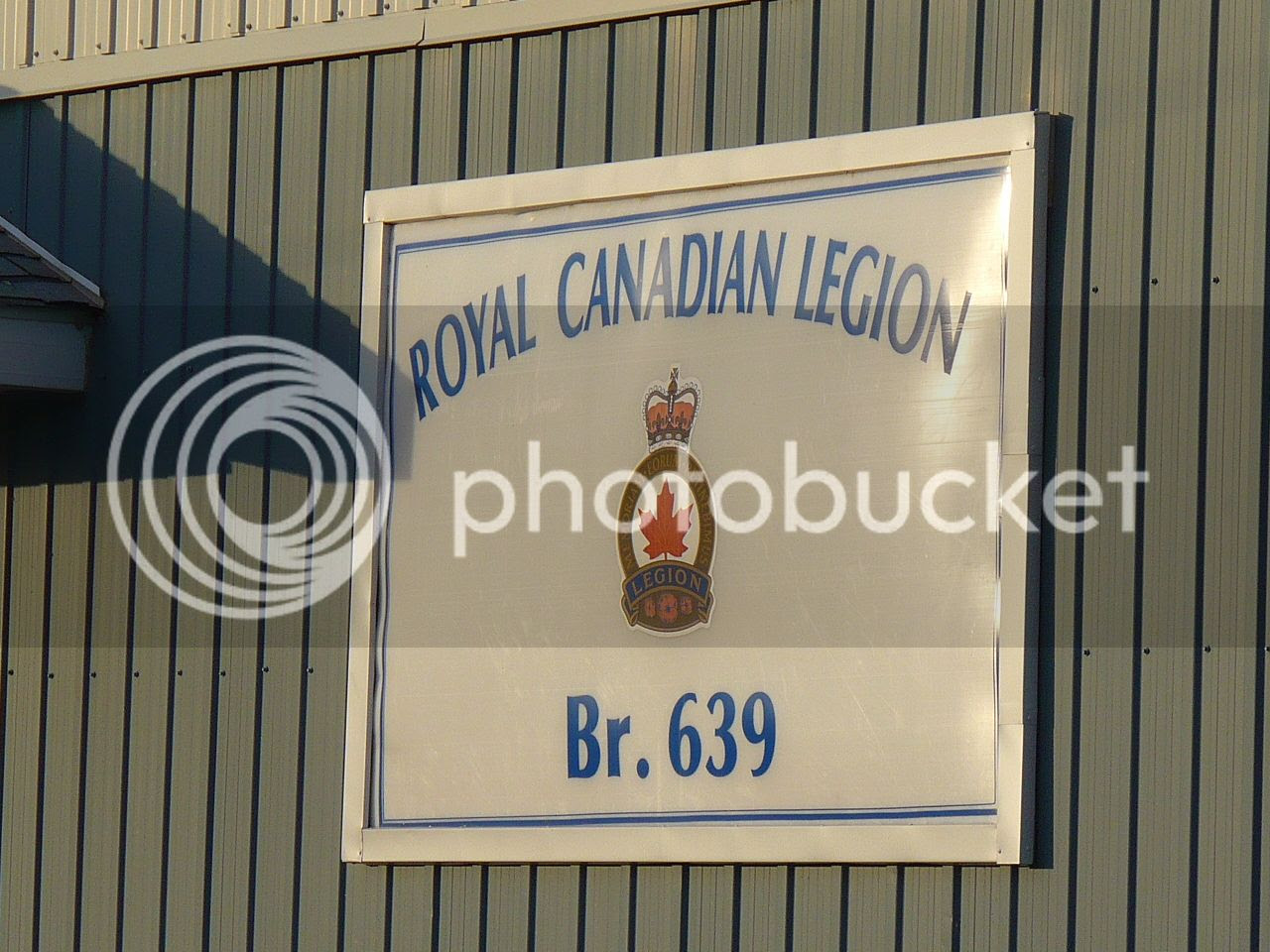 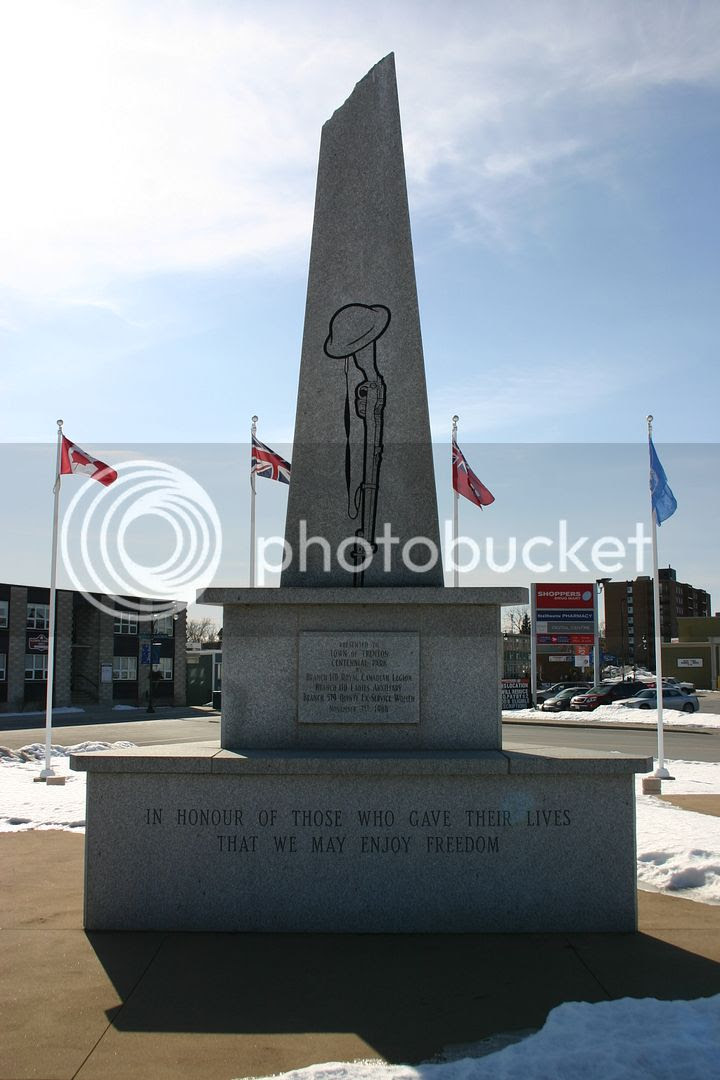 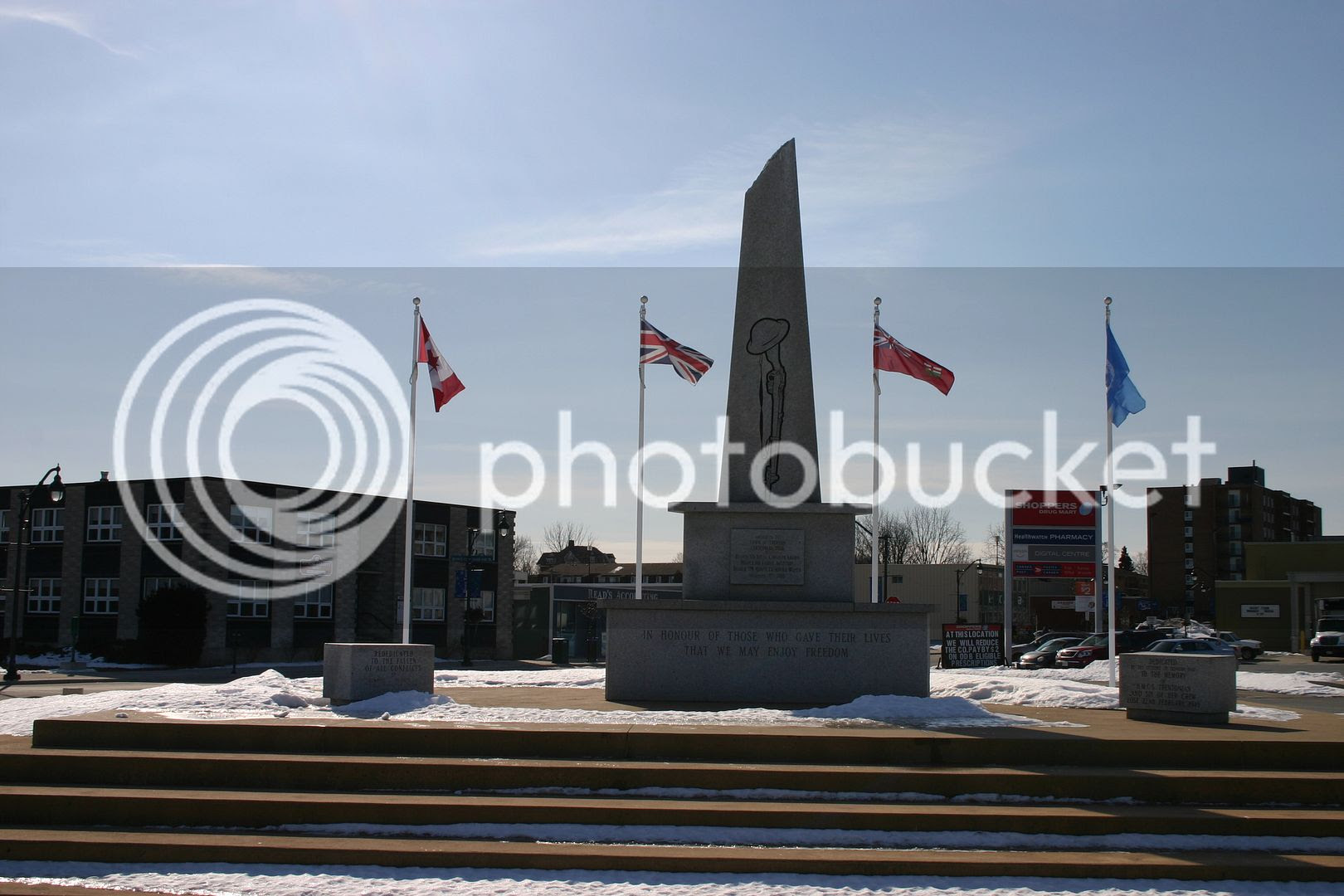 Trenton is famous as a military town, being home to CFB Trenton and the National Air Force Museum, let us not forget the sacrifice made by the citizens of this town, in the service of our country.
The memorial is situated in a triangular-shaped memorial park, and the cenotaph itself is also triangular in shape, representing the three main branches of service, namely Army, Air Force and Navy.
The memorial was constructed in 1968, based on a design by Carl Taylor.  In 1988, it was re-dedicated once again with the addition of two smaller blocks to commemorate the  re-dedication of the memorial and to recognize the losses of the crew of H.M.C.S. Trentonian.  The Trentonian was lost to torpedoes during a convoy mission, after serving bravely at Normandy and the Battle of the Atlantic. 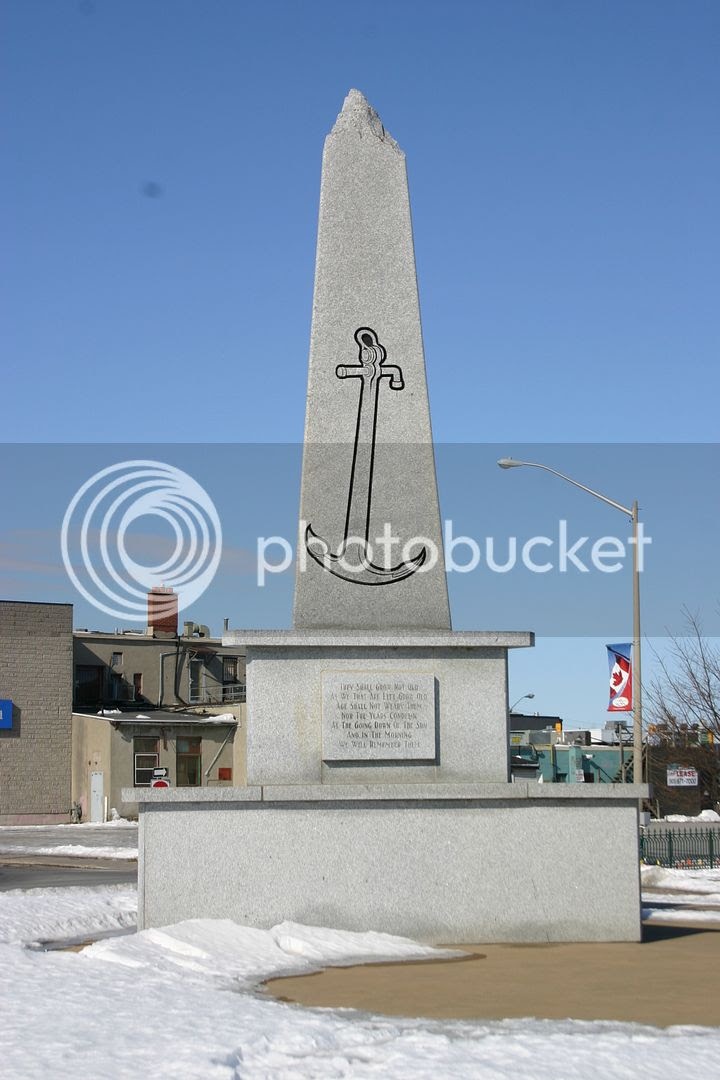 Navy side:
THEY SHALL NOT GROW OLD
AS WE THAT ARE LEFT GROW OLD
AGE SHALL NOT WEARY THEM
NOR THE YEARS CONDEMN
AT THE GOING DOWN OF THE SUN
AND IN THE MORNING
WE WILL REMEMBER THEM 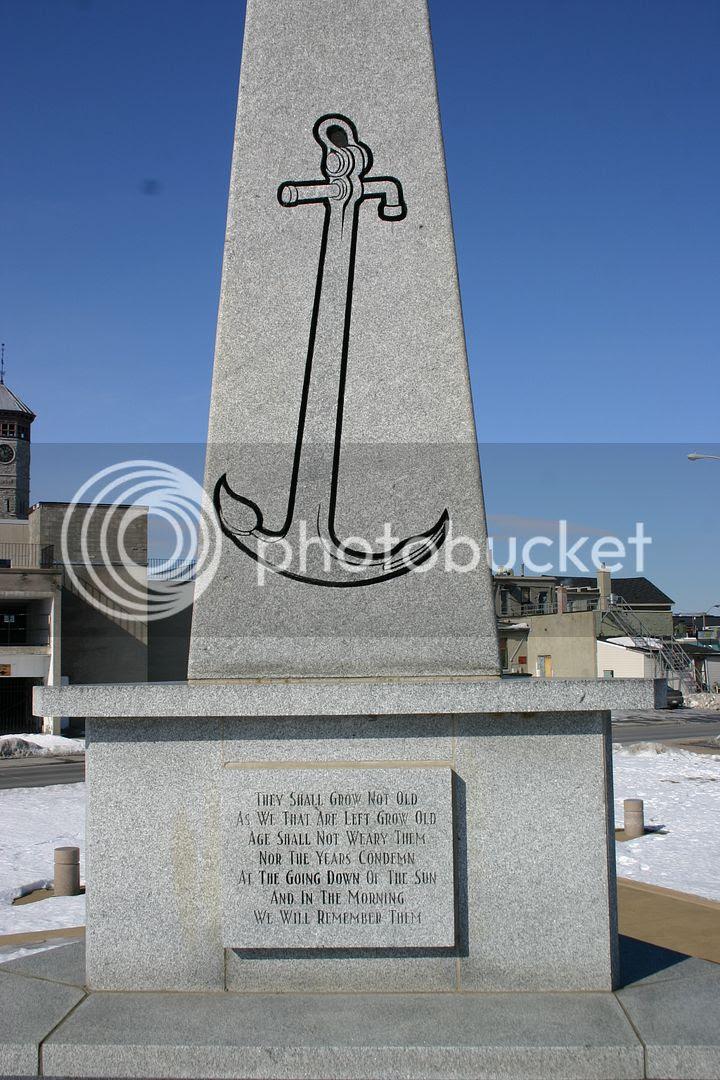 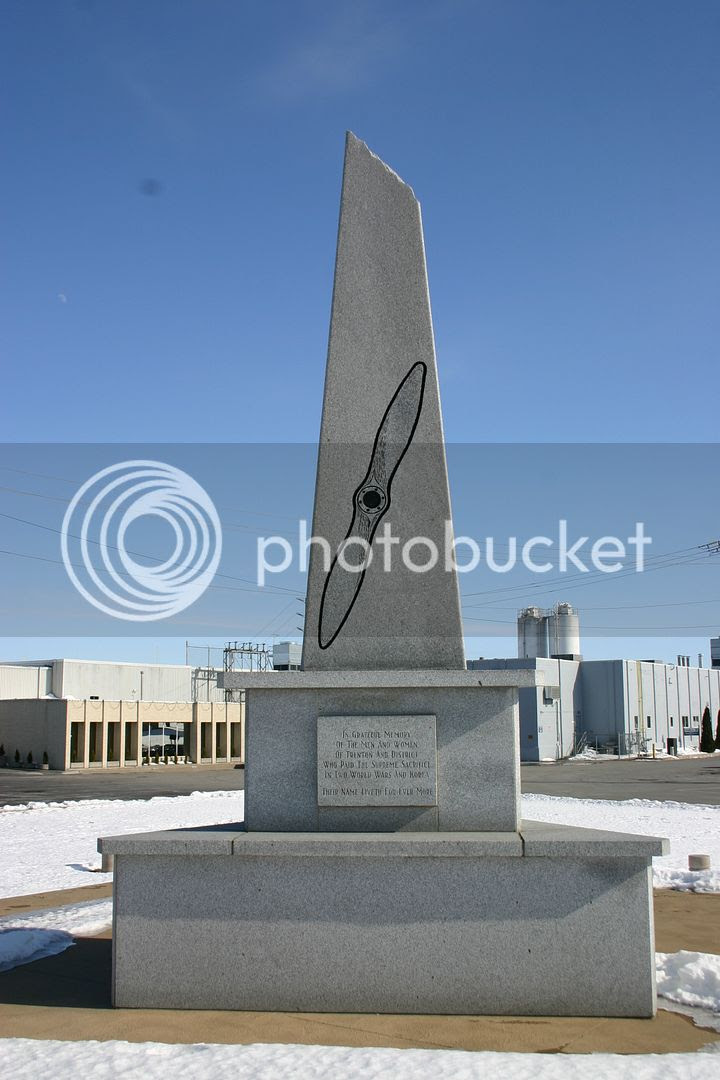 Air Force side:
IN GRATEFUL MEMORY
OF THE MEN AND WOMEN
OF TRENTON AND DISTRICT
WHO PAID THE SUPREME SACRIFICE
IN TWO WORLD WARS AND KOREA

THEIR NAME LIVETH FOR EVER MORE 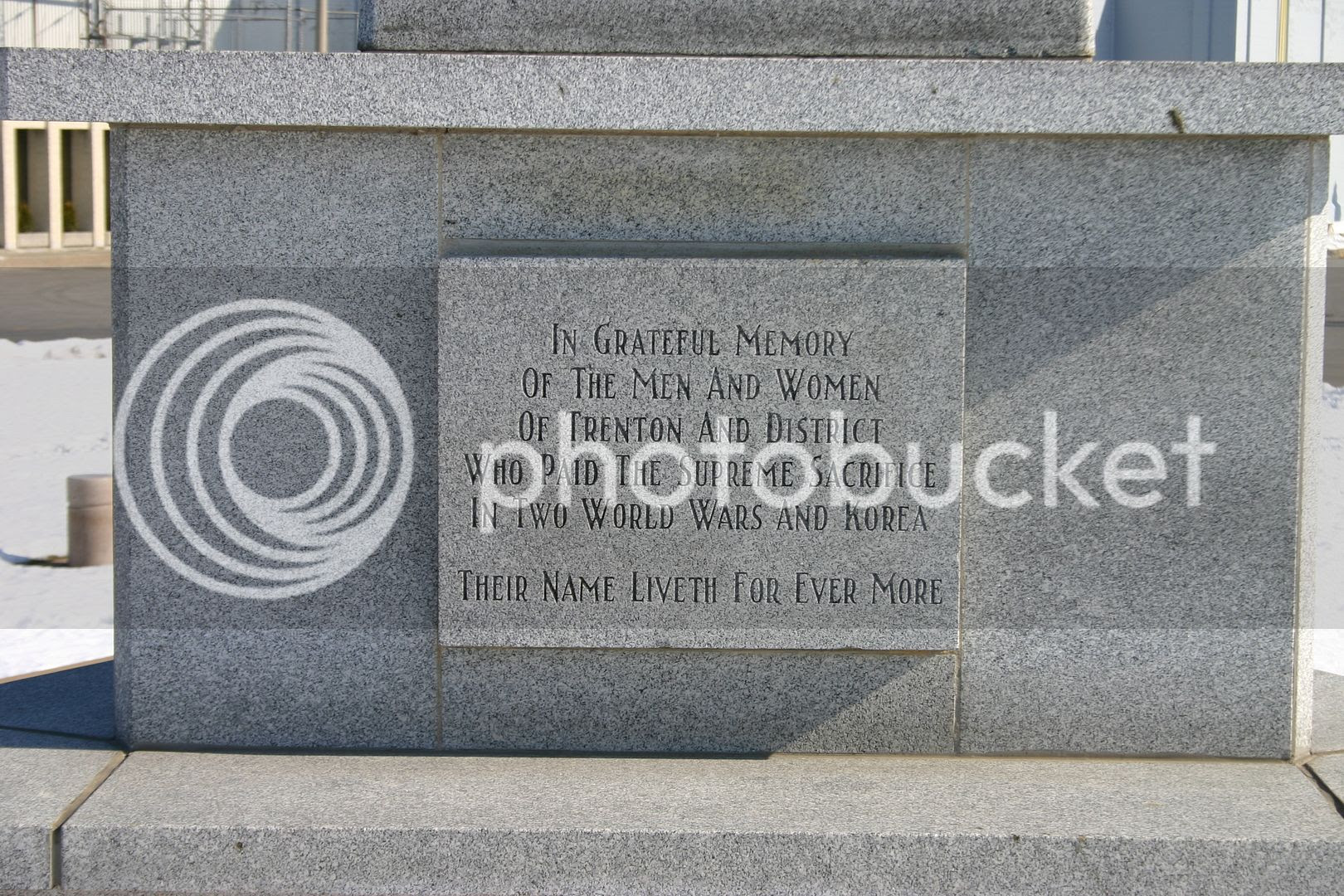 Small block:
REDEDICATED
TO THE FALLEN
OF ALL CONFLICTS
BY
MEMBERS OF BRANCH 110
ROYAL CANADIAN LEGION
SEPTEMBER 1988 Small block:
DEDICATED
BY THE CITIZENS OF TRENTON, 1990
TO THE MEMORY
OF
HMCS TRENTONIAN
AND SIX OF HER CREW
LOST 22nd FEBRUARY, 1945 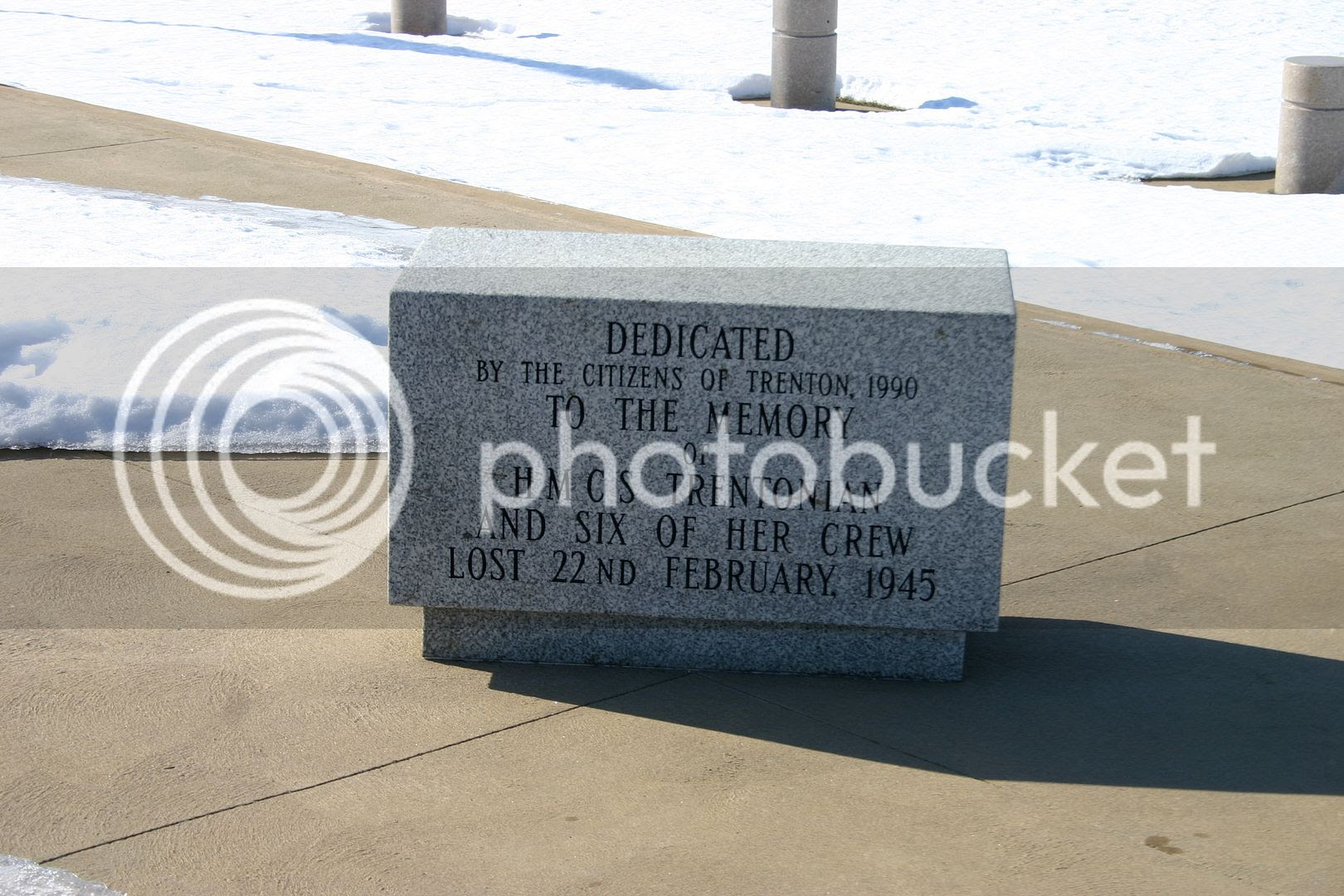