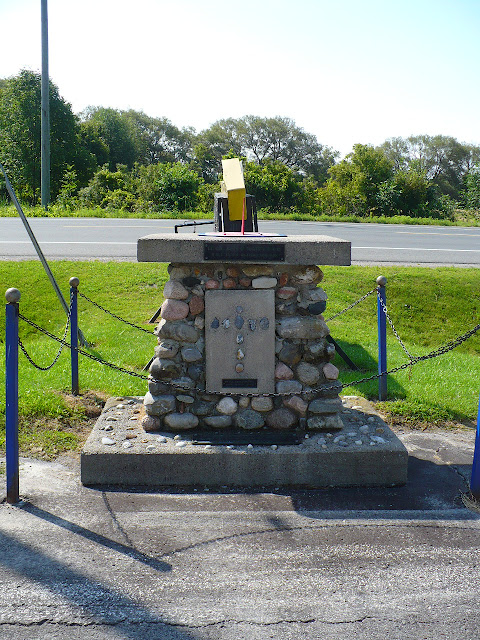 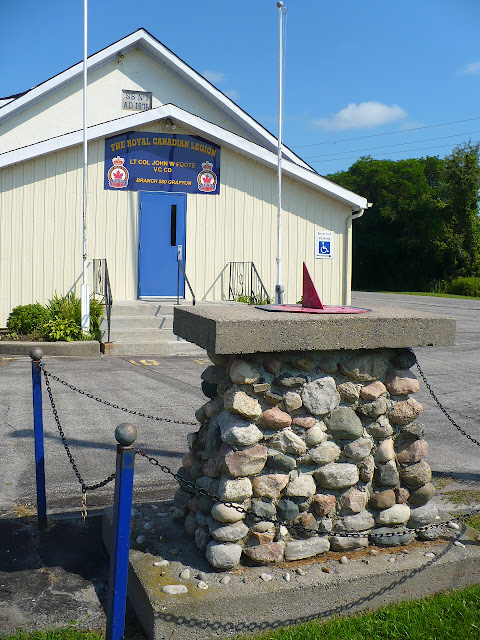 This memorial is somewhat unique, in that it is constructed with stones from the beaches of Dieppe.  The Royal Canadian Legion Branch #580, is named after Lt. Col. John W. Foote  VC. CD., who served with the Royal Hamilton Light Infantry.  He was decorated with the Victoria Cross for bravery at Dieppe.  He is the only member of the Canadian Chaplain Services to ever have received this medal.    The armoury in Hamilton has been re-named after him, and is now listed as a Canadian Historicsl Site.  After the war, he resided in nearby Cobourg.  For more history of Lt. Col. Foote's bravery and storied life, please refer to the Legion website:
http://www.rcl580.ca/lt-col-john-w-foote-v-c-c-d/

The memorial itself is mostly constructed of field stones, with some Dieppe stones added for decoration by the Dieppe War Veterans Association.  The top of the memorial features a sundial, which is something I have never seen before on any memorial, and I am unsure of its significance.  Three small plaques have been added to the face of the memorial and a Dieppe stone cross is in the centre. 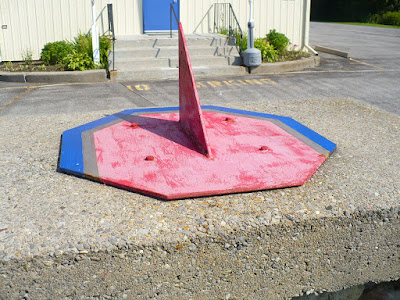 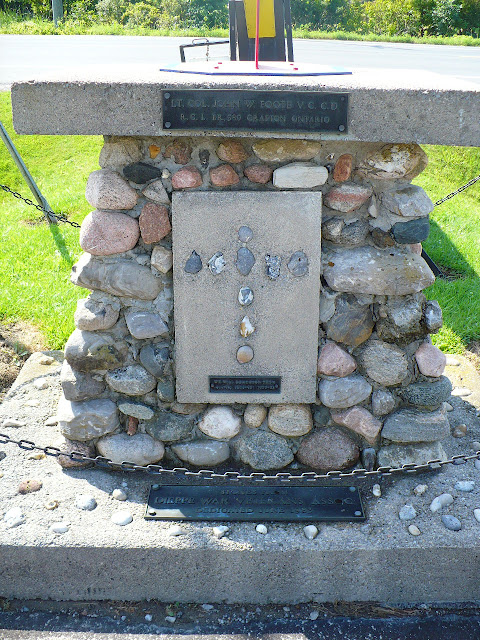 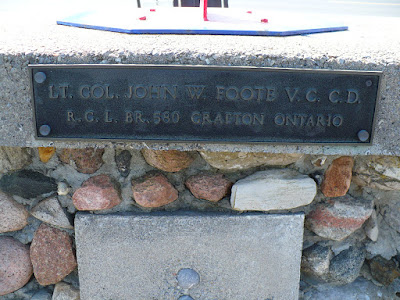 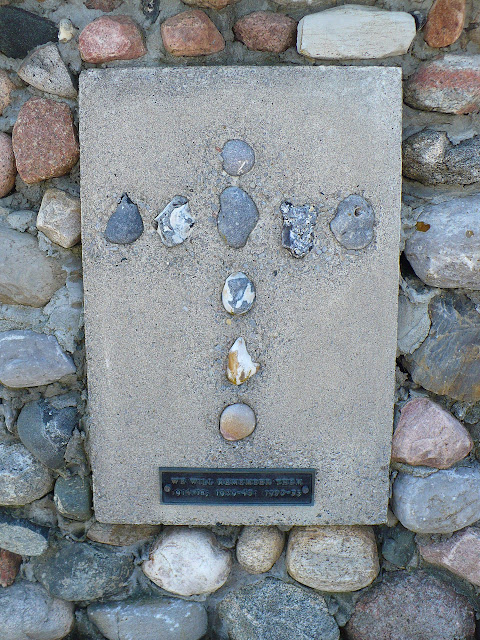 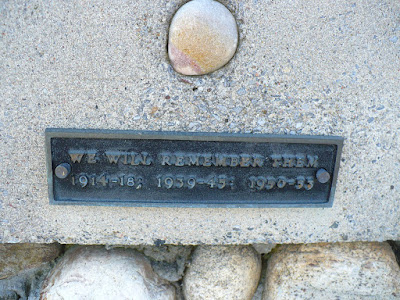 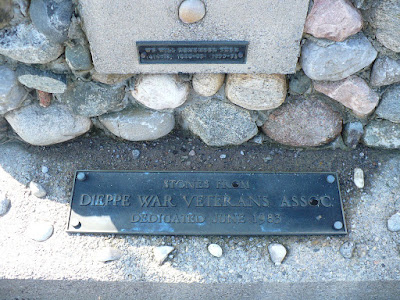 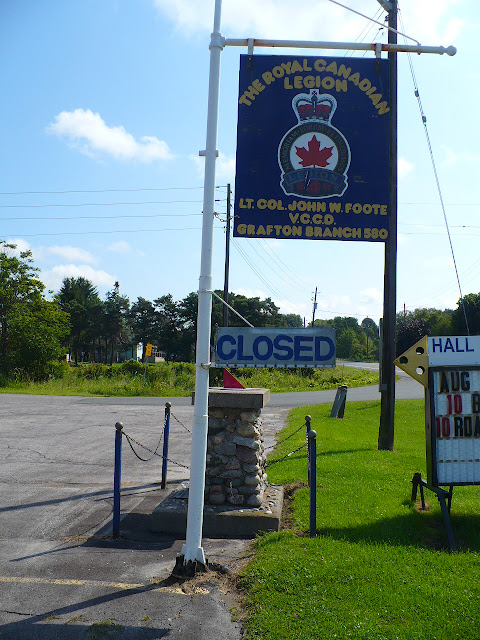 This memorial is a tribute to the Wren's, the Women's branch of the Royal Canadian Navy.  It was first unveiled in 1972, then re-dedicated again in 2010, on the 100th anniversary of the Navy.  The memorial features a Wren in uniform, and two small plaques recognizing their contribution.
Galt, now part of Cambridge was the main training base for the Wrens, designated as H.M.C.S. Conestoga.  The Navy was the last of the major branches of the armed forces to include women, they having played a key role in the medical field during World War I.  The Army and Air Force each established a Women's branch in 1941, the Navy finally adding women in 1942, taking the assistance offered from the British Royal Navy.
A much more detailed and inclusive history can be found in the following links:
https://legionmagazine.com/en/2012/12/the-navy-e2-80-99s-women-e2-80-9470th-anniversary-of-the-wrens-navy-part-54/
http://www.thewrens.com/history/canada/

Marker text:
Top plaque:
TO HONOUR THE WOMEN'S
ROYAL CANADIAN NAVAL SERVICE,
AND TO EXPRESS THANKS TO THE
CITY OF GALT, WHERE THEY
RECEIVED THEIR BASIC TRAINING
1942-1946
(repeated in Fench)
8 0CT - 1972

A tribute to our shipmates
All the gallant men and women
who served at sea and ashore in the Canadian Navy
Past, Present and Future

The Hugh Allan Branch #158 of the Royal Canadian Legion, found in the pretty town of Port Dover, is one of the busiest you will find.  Hosting several community events every year and keeping an updated Facebook page with all the weekly events, from euchre night, dinner, darts, and the list goes on.
At the entrance to the Legion, stands a pair of plaques to honour the men from Port Dover and Woodhouse who gave their lives in the World Wars.  While the Legion is constantly promoting community events, fun and frolic, they also continue to pay respect to those who have served before us.
The Legion is named after Hugh Allan, a Chief Engineer with the Merchant Navy.  He died February 22nd, 1942, when his ship, the S.S. George L. Torian, was torpedoed by a German U-boat, 120 miles off the island of Trinidad.

Marker text:
Top plaque:
1914   1919
IN MEMORY
OF PORT DOVER AND WOODHOUSE BOYS
WHO GAVE THEIR LIVES IN THE GREAT WAR

Lower plaque:
1939    1945
IN MEMORY
OF PORT DOVER AND WOODHOUSE BOYS
WHO GAVE THEIR LIVES IN WORLD WAR II