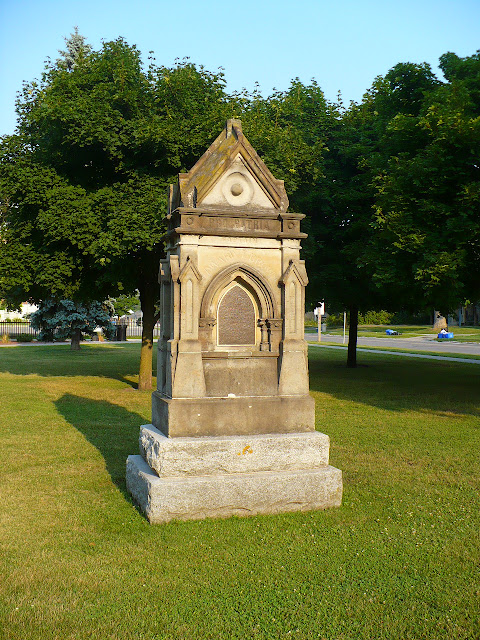 At the north side of Confederation Square, at George Street North and McDonnell Street. 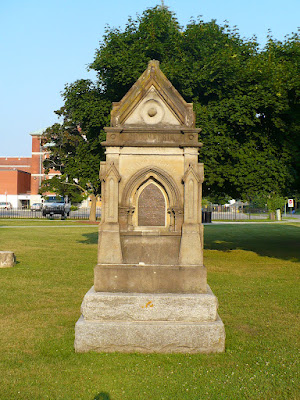 This beautiful memorial was erected in May 1886 in memory of Captain Edward T. Brown, who died at the Battle of Batoche during the Northwest Rebellion in May 1885.  He was the only local militia member to have died during that conflict.

The memorial was designed by Peterborough architect and engineer John E. Belcher.  Originally the ornate, Gothic-designed monument was located in another part of the park and was designed as a fountain.  With the unveiling of the cenotaph after WWI, this memorial was moved in 1929 to its current location in the same park.  In 1985, the centennial year for the battle, the memorial was restored.  The original engraving that was carved in the soft sandstone was barely legible, so a new plaque was installed and the fountain that had not functioned in several years was removed.

At one time, in the history of our young country, this elegant memorial was held is high esteem by the citizens of Peterborough.  While today it is still revered by those in the know, it is vastly overshadowed by the nearby cenotaph and its beautiful sculpture.  It is still important to remember the sacrifices made by individual volunteer soldiers during their time of service for their country. 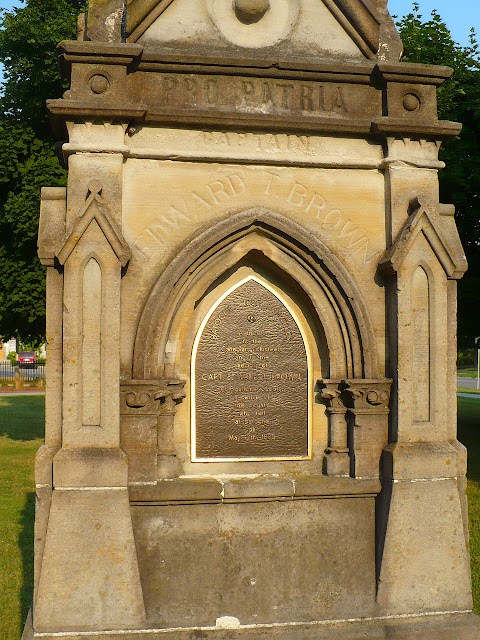 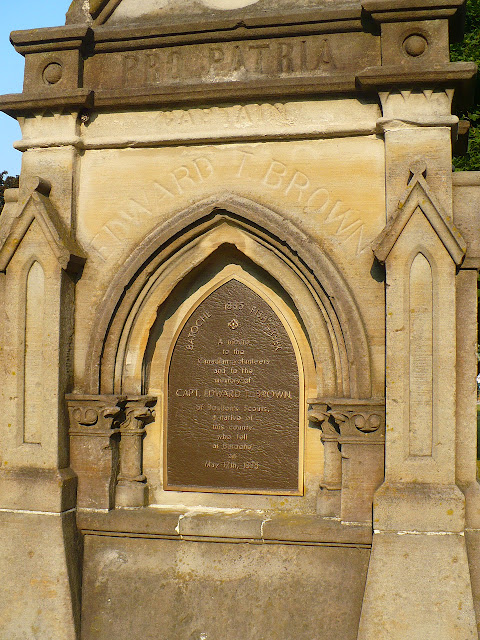 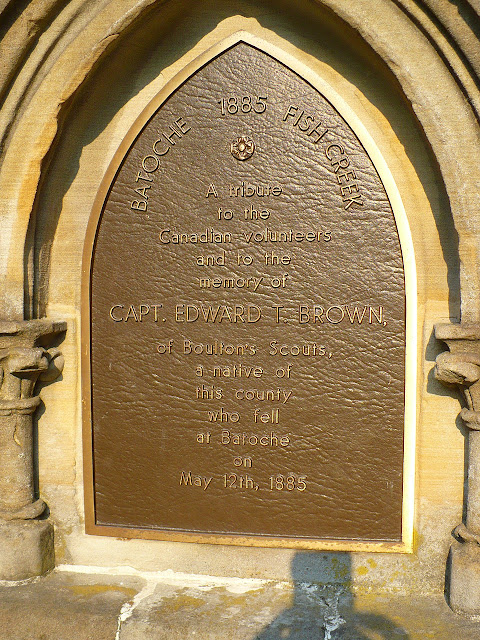 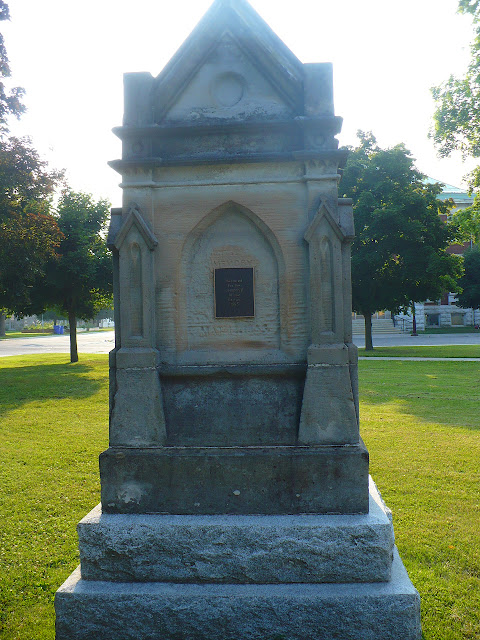 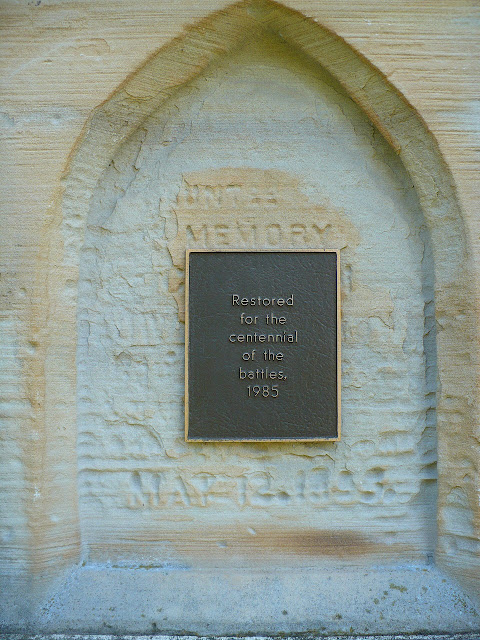 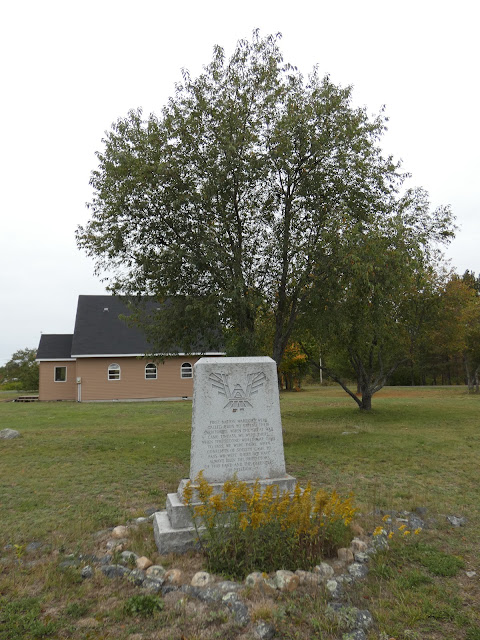 In the small park area near the Shawanaga School, off Church Street. 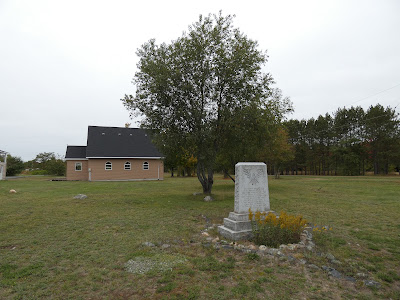 This memorial is located on the lands of the Shawanaga First Nations, part of the larger Anishnabek Nation, which stretches across Ontario and throughout the Great Lakes region.  The First Nations have a long tradition of honour and bravery when it comes to defending our country in times of war and in peace.  The memorial found here was placed in remembrance of those who fought for freedom for all of us.  The Shawanaga Reserve is home to over 200 citizens and each year hosts a pow wow and community festivities.  Across the road from the park is a small and sad cemetery with several military headstones of those who served their country. 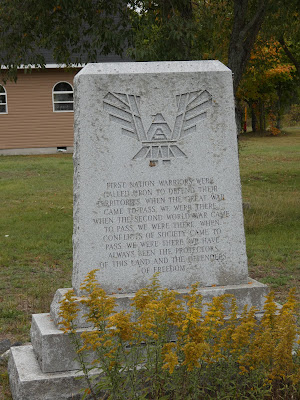 CALLED UPON TO DEFEND THEIR

TERRITORIES.  WHEN THE GREAT WAR

CAME TO PASS, WE WERE THERE.

WHEN THE SECOND WORLD WAR CAME

TO PASS, WE WERE THERE.  WHEN

CONFLICTS OF SOCIETY CAME TO

PASS, WE WERE THERE.  WE HAVE

ALWAYS BEEN THE PROTECTORS

OF THIS LAND AND THE DEFENDERS 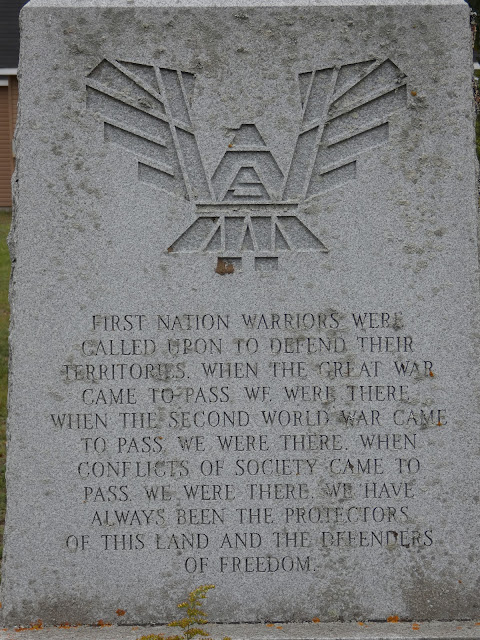 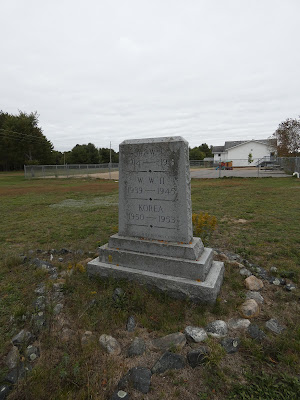 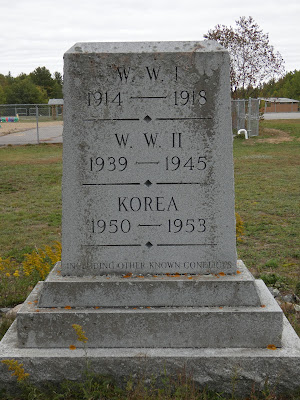 INCLUDING OTHER KNOWN CONFLICTS 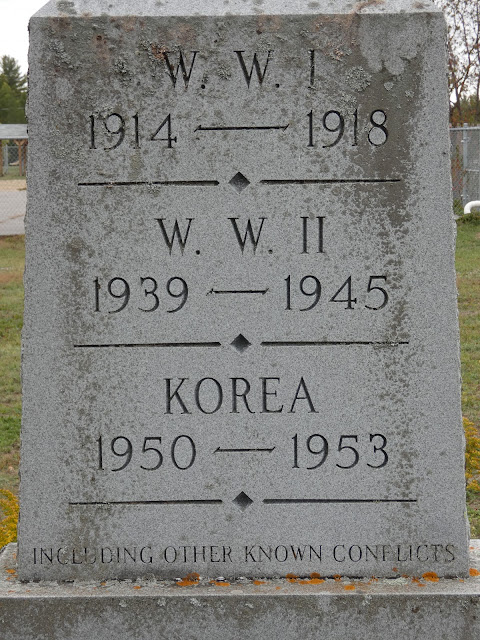 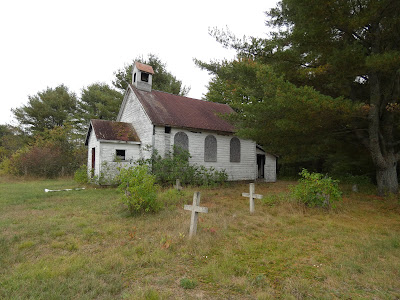 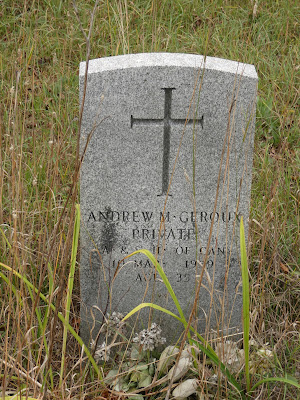 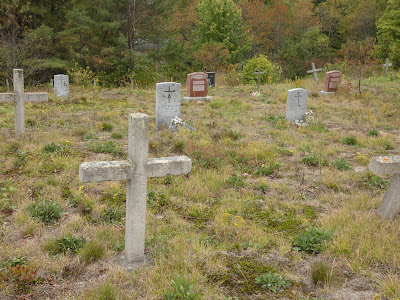 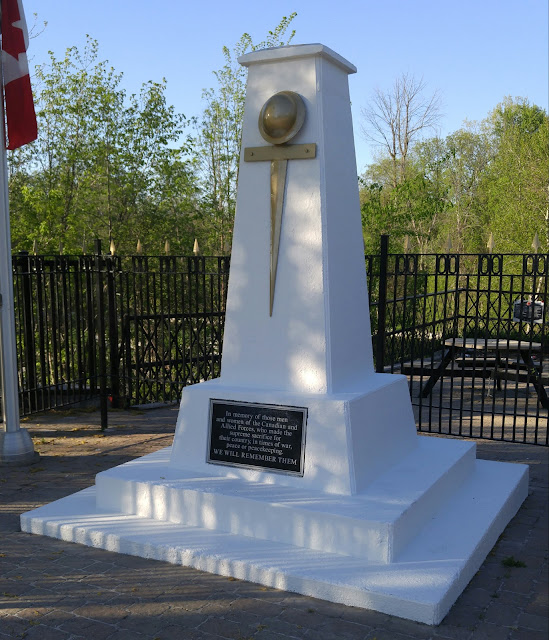 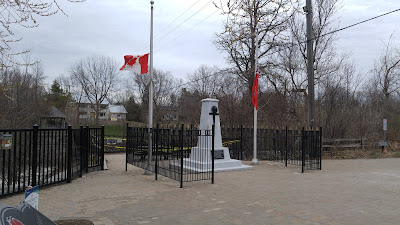 The Manotick Remembrance Park is found in a beautiful, historic area along the Rideau River.  The village is a small suburb of the City of Ottawa.  The memorial consists of three parts, all connected by a walking path.

First is the cenotaph itself, the Manotick Cenotaph is composed of grey concrete and a metal plaque.  It is dedicated to the memory of men and women of the Allied Forces who made the supreme sacrifice for their country. The wrought iron fence surrounding the cenotaph was once installed at the residence of The Rt. Honourable Sir Robert Borden, Prime Minister of Canada from 1911 – 1920.

Second, is the Veterans' Walkway, which leads from the cenotaph to the historic Watson's Mill.  Veterans' Walkway is dedicated to those who served their countries in times of war, peace and peacekeeping. There is a dedication plaque at the start of the pathway of interlocking bricks and close to 200 bricks in the walkway dedicated to individual veterans or military units.

Finally, we have the Manotick Remembrance Park which was opened July 2, 2017 as a place to remember and to reflect on the contributions made by those who served their country in war and peace. There is statue of an old veteran holding hands with a young girl and several signs dedicated to the various branches of the Canadian Forces and to the history of the area.

**Special thanks the Louise Bellec for the photographs. 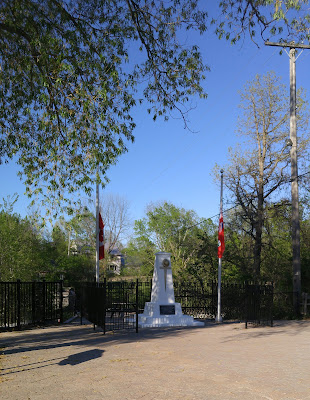 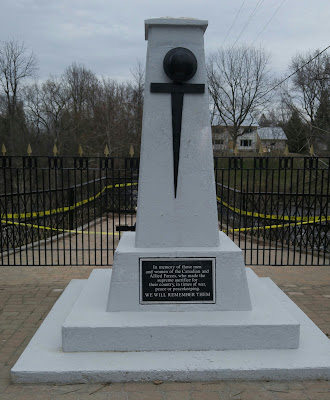 In the memory of those men
and women of the Canadian and
Allied Forces, who made the
supreme sacrifice for
their country, in times of war,
peace or peacekeeping.
WE WILL REMEMBER THEM 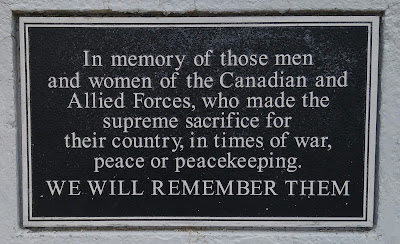 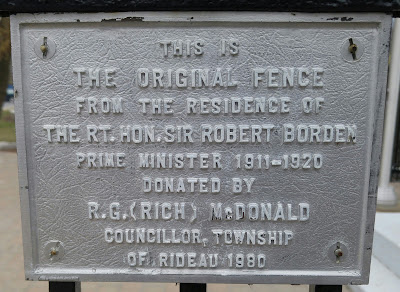 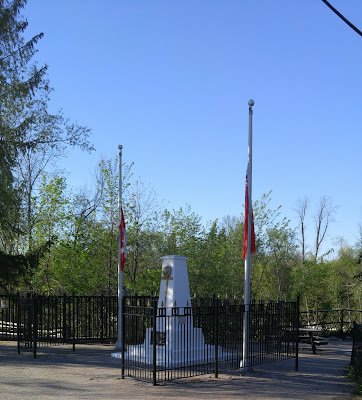 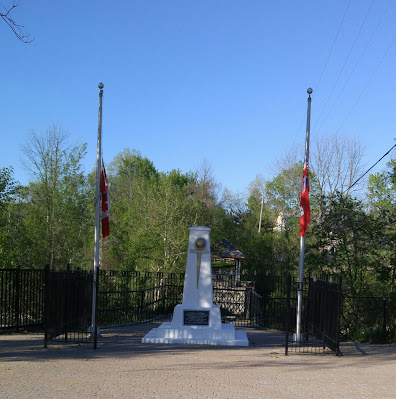 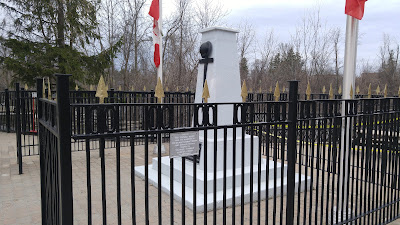 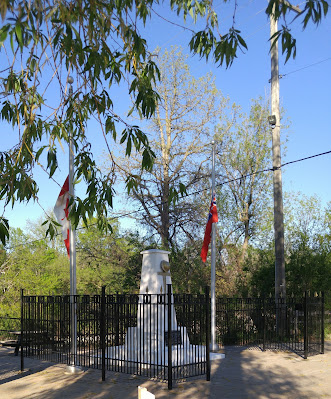 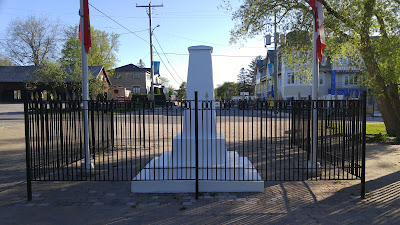 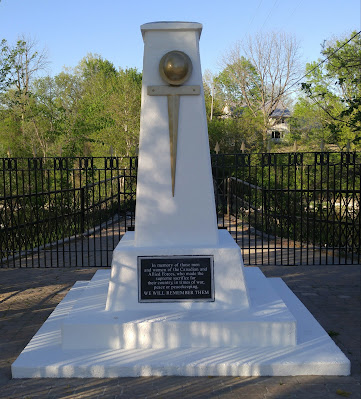 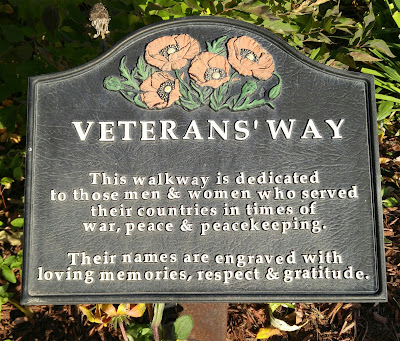 This walkway is dedicated
to those men & women who served
thier countries in times of
war, peace & peacekeeping.

Their names are engraved with
loving memories, respect & gratitude.