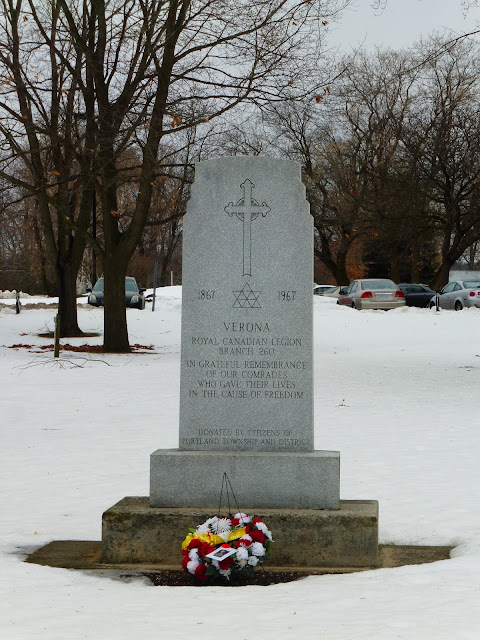 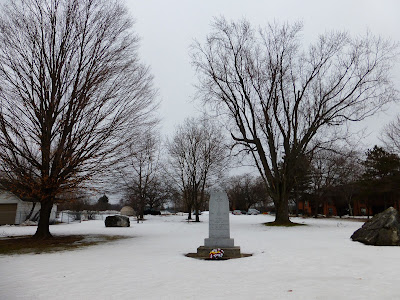 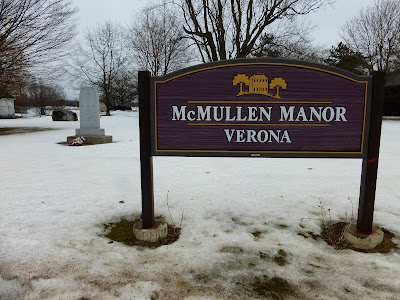 This memorial was erected as part of the 1967 Centennial activities.  It is sponsored by the Royal Canadian Legion Branch 260, and was donated by the citizens of Portland Township.
It is a simple memorial dedicated to the cause of peace, mentions no wars or individual names of those who served, only a remembrance of those who died for our freedom. 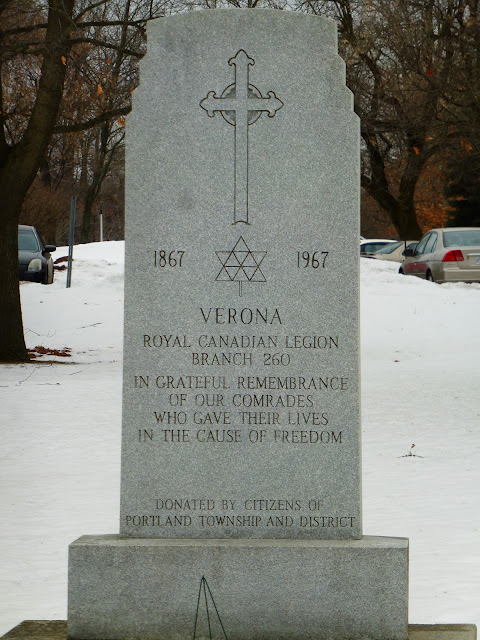 DONATED BY THE CITIZENS OF
PORTLAND TOWNSHIP AND DISTRICT 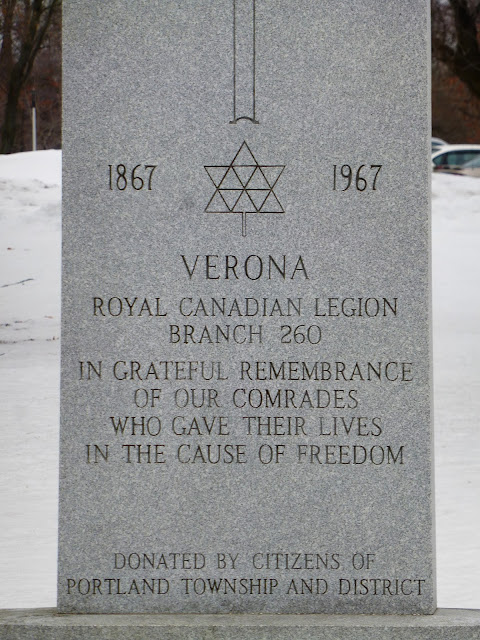 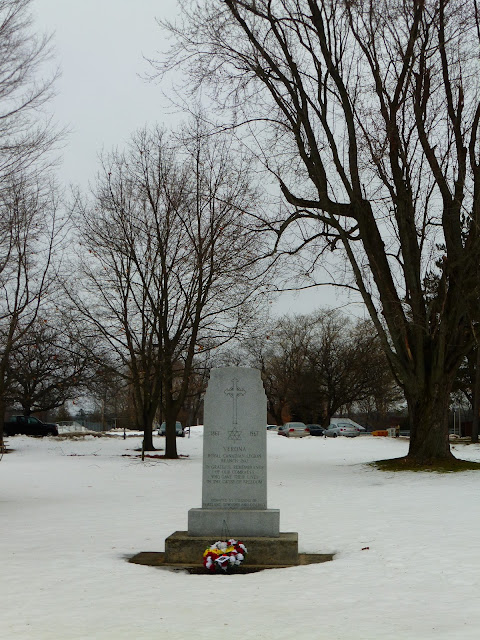 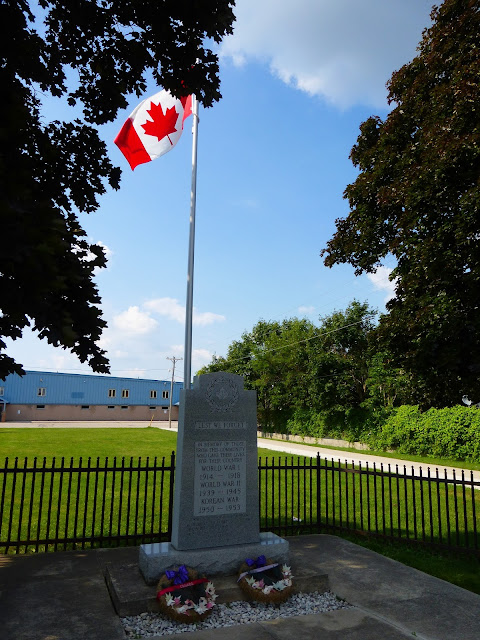 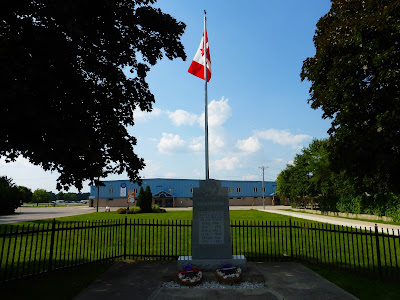 This memorial is sponsored by Royal Canadian Legion Branch 531, which is located nearby.  The granite stone pays tribute to the major wars of the 1900's and lists the names of those lost from this community.  Although only a short distance from the City of London, Ilderton has always maintained a rural feel to it, largely being a farming centre until the recent encroachment of the city has turned this busy village into a bedroom community. 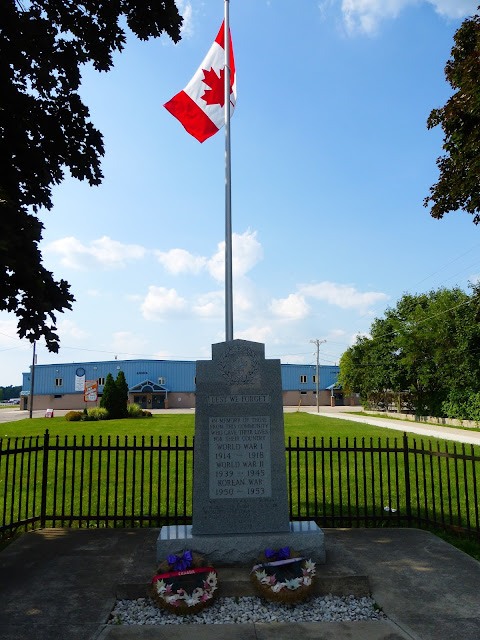 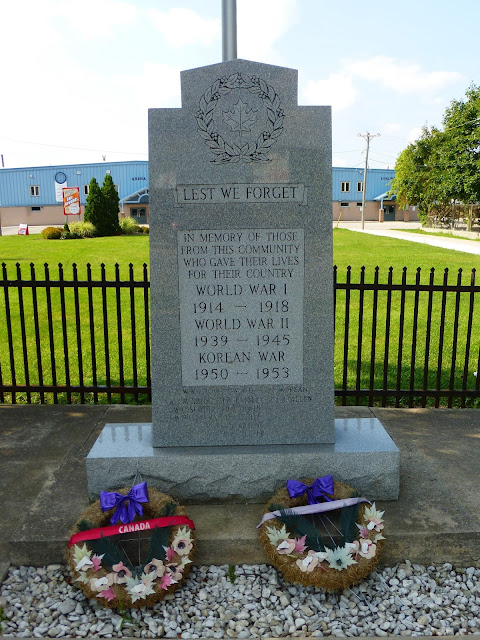 Marker text.
LEST WE FORGET 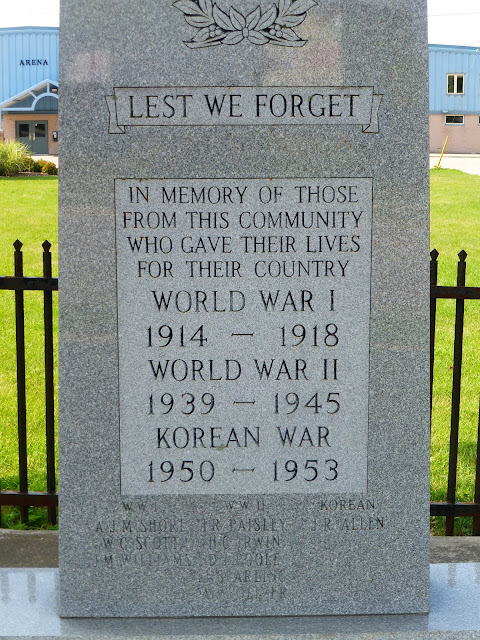 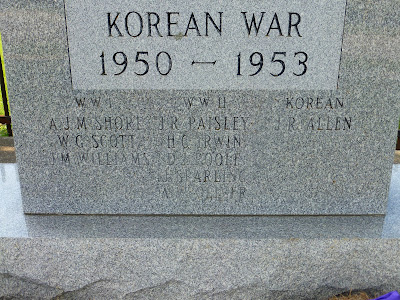 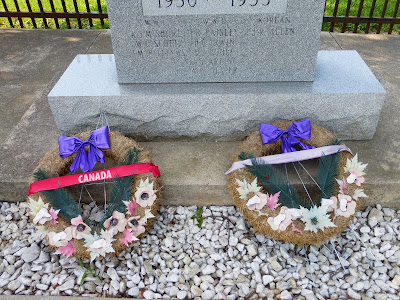 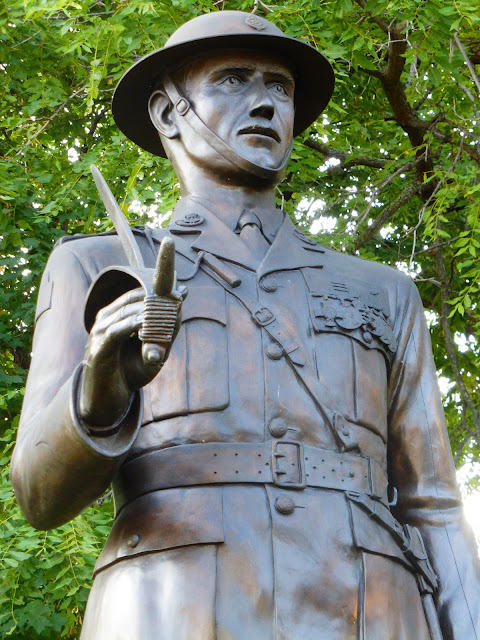 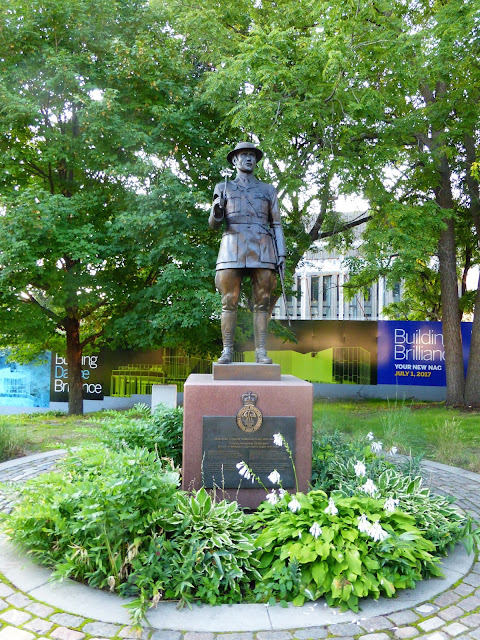 This memorial statue of Brigadier Andrew Hamilton Gault DSO, OBE, ED, CD (1882-1958), was erected in 1992.   The bronze statue was made by sculptor Don Begg, in 1990.
Brigadier Gault was the man who founded, funded and formed the Princess Patricia's Canadian Light Infantry at the outbreak of WWI.  This was last privately raised regiment in the British Empire.
He served in the South African War as a commissioned officer in the 2nd Canadian Mounted Rifles.  After that conflict he returned to Canada and stayed with the militia as a member of the Black Watch (Royal Highland Regiment) of Canada.
With the outbreak of war in 1914, Gault began his quest to form his own Regiment, made up of men who had previously seen military action, such as those veterans of the South African War or British Army.  The Princess Pats given parliamentary charter on August 10, 1914, and after only ten days of recruiting were almost 1,100 men strong.  They where the first Canadian soldiers to arrive in France, seeing their first action at St. Eloi in 1915.  Gault led his men into battle and was wounded several times, ultimately losing his left leg to his injuries.  The PPCLI continued to fight in all major battles of the Great War, and by the end, Gault was one of only two officers of the regiment to have survived the war.
After the war, he returned to England and continued his career as a politican.  At the start of WWII, he served on the staff of the Canadian Army in England.  He returned to his home in Montreal in 1944, due to his health and remained a key figure with the PPCLI after the war, becoming honourary Colonel of the Regiment until his death in 1958. 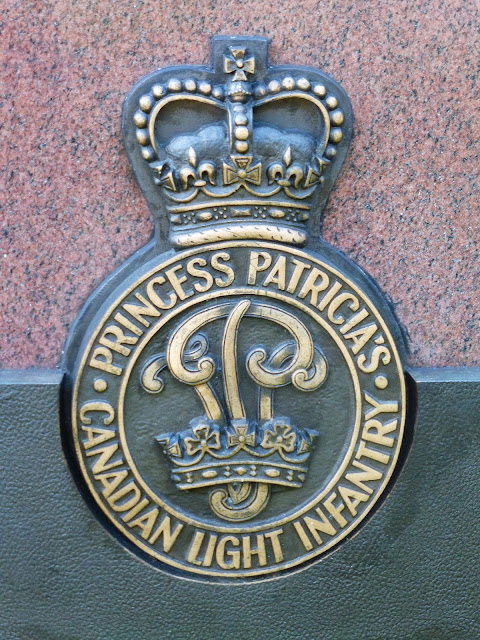 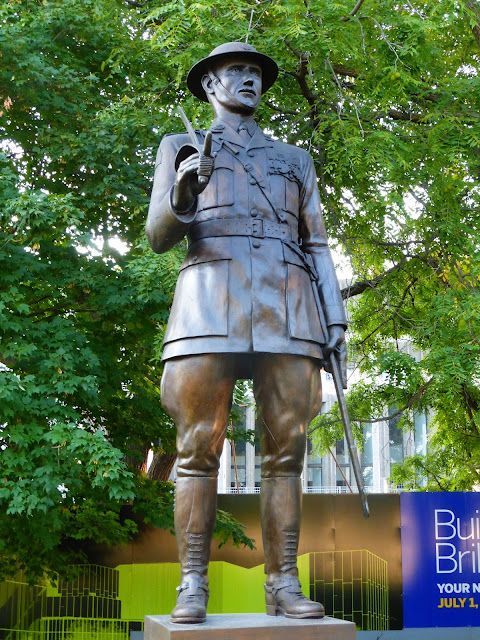 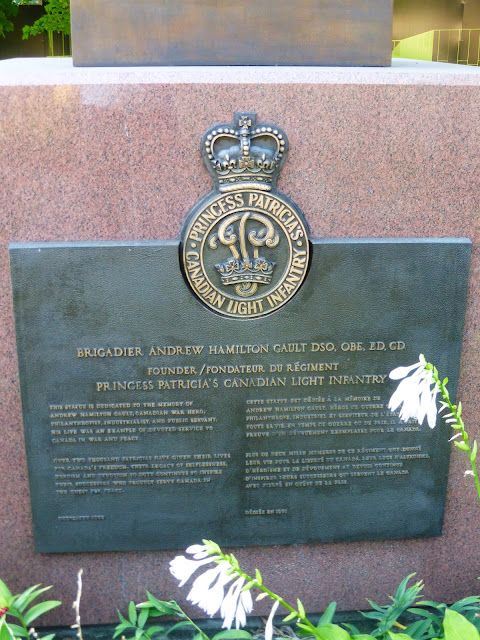 THIS STATUE IS DEDICATED TO THE MEMORY OF
ANDREW HAMILTON GAULT, CANADIAN WAR HERO,
PHILANTHROPIST, INDUSTRIALIST, AND PUBLIC SERVANT,
HIS LIFE WAS AN EXAMPLE OF DEVOTED SERVICE TO
CANADA IN WAR AND PEACE.

OVER TWO THOUSAND PATRICIAS HAVE GIVEN THEIR LIVES
FOR CANADA'S FREEDOM.  THEIR LEGACY OF SELFLESSNESS,
HEROISM, AND DEVOTION OF DUTY CONTINUES TO INSPIRE
THEIR SUCCESSORS WHO PROUDLY SERVE CANADA IN
THE QUEST FOR PEACE. 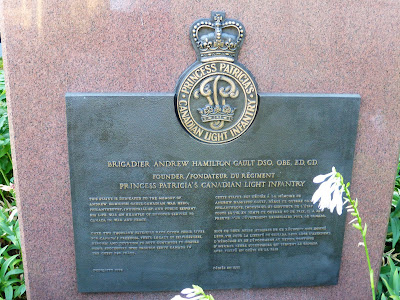 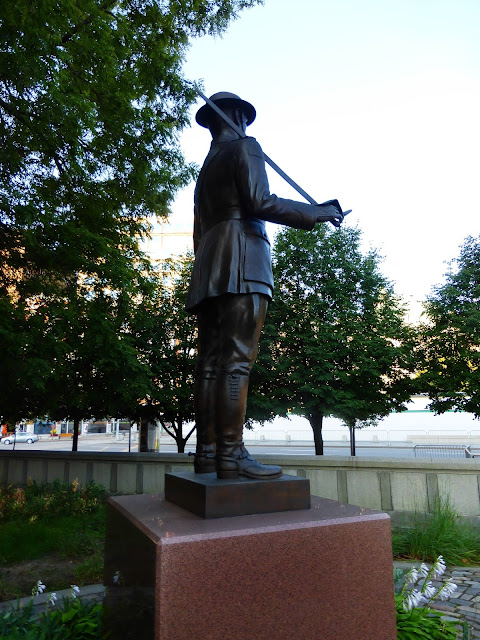 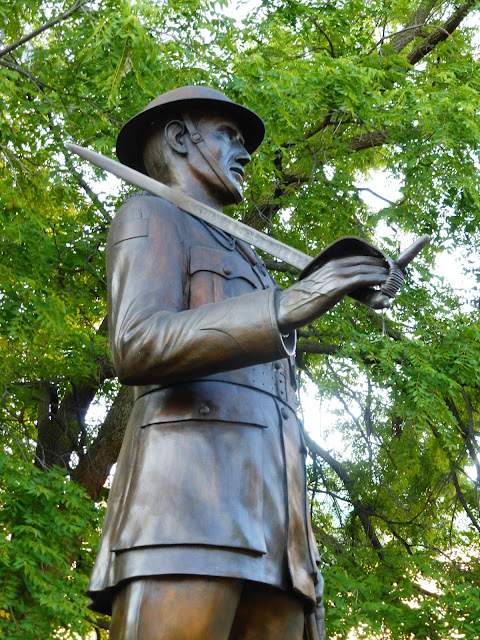 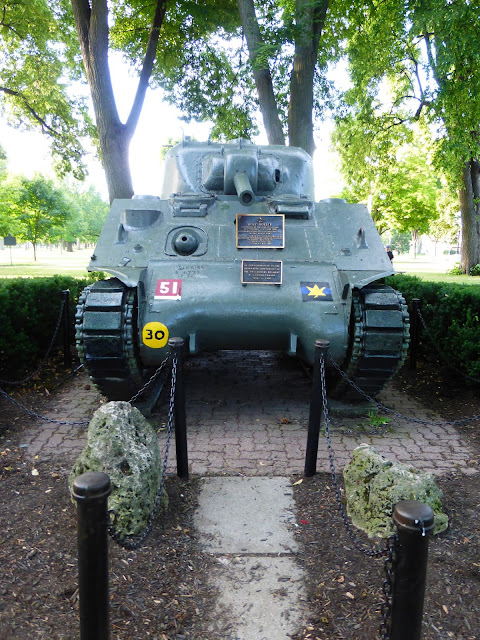 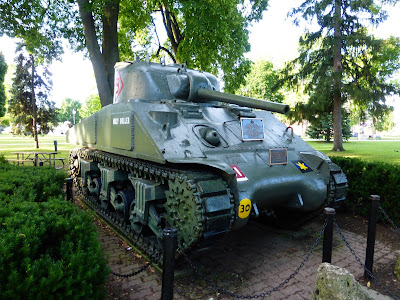 This memorial is a Sherman Tank, dedicated to the honour of the First Hussars.  This is the only tank of the 6th Canadian Armoured Regiment (1st Hussars) to complete the campaign in North-West Europe.  This tank landed on Juno Beach on D-day, then worked its way through the liberation of France, Belgium and Holland.
The First Hussars have a storied history of providing outstanding soldiers to Canada in time of war.  They were first formed as a Reserve Force Regiment in 1856 and continue to this day to proudly serve the City of London and the country as a reserve unit. 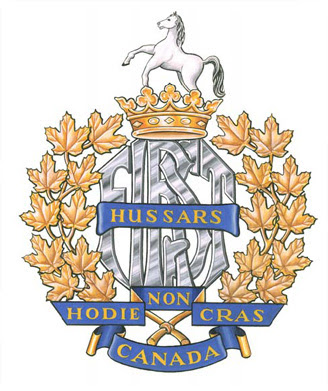 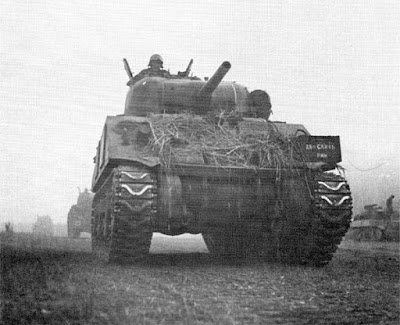 Four plaques are mounted on the Holy Roller to commemorate various milestones in First Hussar history. 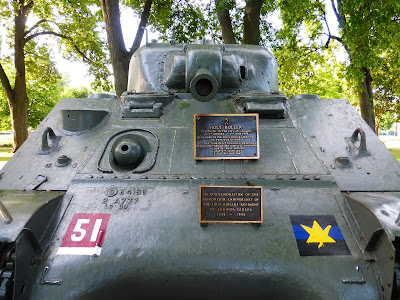 IN COMMEMORATION OF THE
HUNDREDTH ANNIVERSARY OF
THE FIRST HUSSARS REGIMENT
OF LONDON, CANADA
1856 - 1956 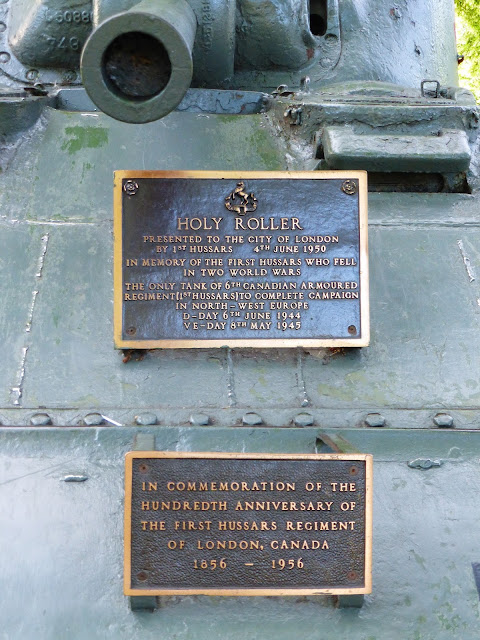 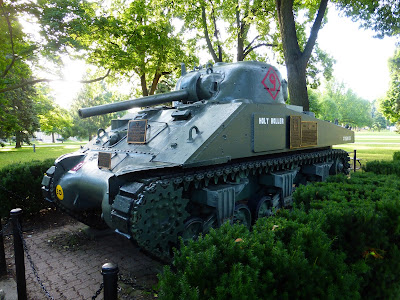 TO THE EVERLASTING MEMORY
OF THE MEMBERS OF
THE 1ST HUSSARS

BOTH THE LIVING AND THE DEAD, WHO TOGETHER WITH
OTHER ALLIED CANADIAN AND ALLIED SERVICEMEN
PARTICIPATED IN THE GLORIOUS CAMPAIGN OF 1944-1945
THE LED TO THE LIBERATION OF THE NETHERLANDS

PRESENTED BY:
THE GRATEFUL DUTCH CANADIANS OF LONDON
MAY 1970

Side plaque right:
1944     1994
THIS PLAQUE IS PLACED HERE TO COMMEMORATE
THE 50TH ANNIVERSARY OF THE ALLIED INVASION
OF NORMANDY ON D DAY, 6TH JUNE 1944.
IT IS DEDICATED TO THE SOLDIERS OF THE
FIRST HUSSARS; TO THOSE WHO TOOK PART IN THE
ASSAULT, TO THOSE WHO FOUGHT IN THE EUROPEAN
CAMPAIGN, AND TO THOSE WHO GAVE THEIR LIVES TO
LIBERATE FRANCE, BELGIUM AND HOLLAND.
"HODIE NON CRAS" 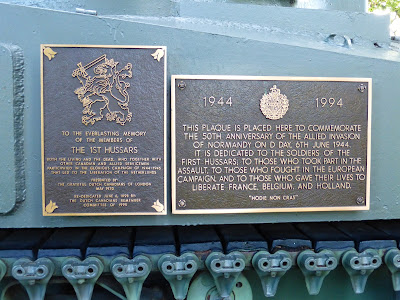 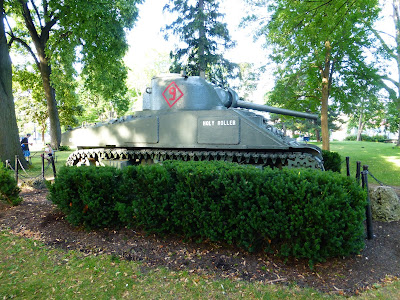